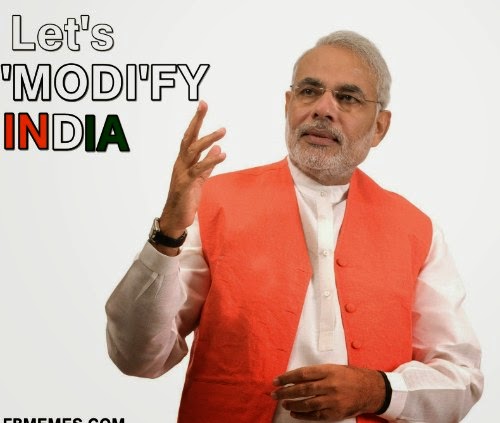 After 10 years, India is going to have a non-Congress govt.This is a historical verdict as for the first time a non-Congress party got absolute majority on its own.Congress reduced to double digit and they have lost the status of being an opposition party.These statements show to what extent people were angry on Congress.BJP has done exceedingly well by sweeping some states and winning more seats in states where they were expected to win not more than 1 seat.Credit goes to Mr.Modi for addressing too many rallies in all the states - from Kashmir to Kanniyakumari.

Most of the exit polls projected 270-280 seats for NDA.People proved them wrong by giving a huge mandate of around 340 seats.The Congress president and vice-president, Mrs.Sonia Gandhi and Mr.Rahul Gandhi respectively,congratulated the new govt and they were cautious enough not to use Modi's name. One TV channel said its defeat of secularism.Some intelligent people(some people who thinks they are intelligent), have started branding people who have voted for BJP as idiots and fascists.If one says he will not vote for Modi - its acceptable.If one says Modi - as a Prime Minister,will not perform,even that is fine.People have their own opinions.But just because the party/person you hate the most is being liked by many,is it fair to brand them fascists/idiots?You people are living in an imaginary world where anything against you/your opinion is non-sense.For example,courts,probe agencies etc are all non-sense according to you.And you guys think everyone else other than you are idiots.Personally,I can only pity on such people.

This verdict is not only against congress,but also for BJP.Which means,this is not just negative voting. People wanted to throw away congress and bring Modi to power.Otherwise I dont see any good reason for BJP's spectacular performance in states like Assam,Haryana etc.Some people in Tamil Nadu are happy that BJP's performance was not upto mark in the state.But what they forget is,still the BJP alliance got the 2nd place by winning 2 seats from TN and 1 from Puducherry(Pondy).According to them there is only Amma wave in TN. If that is the case why ADMK got 3rd place in Kanniyakumari?Is Kanniyakumari not part of TN? It seems they thought Kanniyakumari is in Kerala.Oh,wait wait,it can't be in Kerala as well,as there is no Modi wave in Kerala.The fact is in TN,the ruling party doesnt have a bad name and people went for non-DMK candidates with better winnability prospects.Ofcourse the results are not without disappointments. Some good people Vaiko and Ila.Ganesan could not win. Other than that,this verdict is ok and this only shows people dont want DMK at any cost.That is the only positive aspect of TN verdict.Happy that BJP has a MP in Tamil Nadu - Pon.Radhakrishnan.Surely he will be a minister in Modi's cabinet.He has defeated money,caste,communalism and corruption.Churches openly asked people to vote for congress candidate Vasanthakumar.Lot of money has been spent as well.Inspite of that people preferred to a local leader who has always stood for them rather than voting for a business man who has suddenly remembered his native place.

It will be too hard to come out of such a crushing defeat for congress.But its time to learn from their mistakes.This defeat is actually good for congress so that they can make necessary amendments and come back properly.

Tough task ahead for Modi.He has to deal with moles like Giriraj Singh and Praveen Togadia.Every single move of Modi will spark a debate in TV channels.If a LKG boy Rahim takes the rubber of Ram and if Ram slaps him for that,media will say Modi's govt is against Muslims.So he has to be careful.By providing a good government BJP can win the support of minorities as well.There are some fanatic Muslims who are not ready to accept BJP/Modi as they support Hindus also.Nothing can be done to satisfy this group.Infact nothing should be done to satisfy these people.Fanatics and extremists are there in all religions.But the problem is sensible muslims too are against Modi/BJP.There is a valid reason for this.The constant propaganda by TV channels and honest newspapers like The Hindu against BJP.There are Praveen Togadias,Pramod Muthaliks and Giriraj Singhs who court controversy by making stupid statements.So these sensible muslims are really scared of BJP and they think bringing BJP to power will drive away muslims.Now that BJP has got a decisive mandate.By giving a good government and keeping communal elements at bay,BJP can win the confidence of minorities too.I read an interview of Amit Shah - the master strategist,the man behind such a huge win for BJP. He said that after Modi comes to power,it will bring minorities closer to them.Hope this happens.

Also Modi has to coordinate with state players like Jayalalithaa,Mayawati,Akhilesh Yadav,Mamata Banerjee,Naveen Patnaik etc to ensure that the federal set up in constitution is respected.Other than this he should maintain good relationship with neighbor countries without losing our self respect.He should make plans to revive the economy.

I believe Modi will deliver.Welcome Mr.Narendra Damodardas Modi.Wish you all the best for your new role.
Posted by Harish.M at 12:52 PM