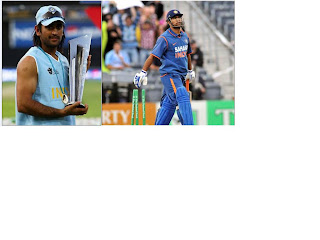 Hi friends,I am back again.This time with a different post.Its all about cricket,Dhoni and media.All are angry now.Already people have burnt Dhoni's poster and photos in public. His parents are scared now and they are fearing another attack on their house(am not joking,am serious).Anyway let us first discuss the causes and then go for consequences and finally conclusion.

First of all I am confused by one fact that what made Dhoni to behave this way.He use to smile for anything and everything and I have never seen him getting angry even on the field.Such a cool headed person has suddenly changed.We all know Dhoni is a fighter.We also know that he dont know to play cricket(fact friends accept it).Even then he has played so many good innings and will never get out till the end.He is such a good fighter. Unfortunately nowadays he has changed his line.Instead of giving a tough fight on the field to win matches,he started fighting with media people and his own team mates.

All I can say is his "Big-Brother" attitude is the main reason for this world cup debacle. Now he has decided that whatever move he makes will fetch him success.He is concentrating more in acting than in action.Mr.Dhoni aim for Wisden award,not for oscar award.He is not even attending press conference with the sole purpose of avoiding media.He(along with other members)is bunking net practices too to avoid speaking to media.Is this any college hour to bunk and go to movies?Even college students(especially sincere people like me :P)will not bunk important classes.But Dhoni is bunking net session itself.hmmm...what to say.Even Ireland plays better cricket compared to India.Even most dumbest captain will give full 4 overs to the bowler who has been at his best on that particular match.But only Dhoni will give over to those bowlers(Ojha) who has been at their worst on that particular day instead of most economical bowlers(Irfan Pathan.I am speaking the match against West Indies).

Another intelligent move by our captain marvel that makes me wonder is he went with the same team inspite of losing 2 matches in the super8.Anyway you are out of the tournament,y dont u try giving chance to players at bench(Praveen Kumar,Dinesh Karthik etc..).I think Dhoni feared that if he has included Karthik and P Kumar India will win.Then the media will criticise Dhoni for not picking the best team.So let us play with the same team,if we win we can say:"though we lost we played good cricket" if not then also it doesnt matter much as there is not much difference between 2 and 3 defeats.

Now we will come out of cricket.Yes India lost.But the media(especially Headlines Today,most crappiest news channel)has created a situation as follows:

I am not saying this,but the media is hyping this defeat like this.Sania Mirza has qualified for quarter finals(or even semi finals i think) in Aegon Cup,Leander Paes won his 9th grandslam title(mixed doubles),these channels didnt hype these things this much.They have created an image that Dhoni is a villain for the whole nation.There are terrorists who laugh out loudly in courts in front of the judge itself,the media is not portraying them as villains,but silly mistakes like this are exaggerated very much.

The way Headlines Today acted in the Sehwag-Dhoni issue was extremely pathetic.There might be some misunderstanding btwn Dhoni and Sehwag but this channel has published a news that there is a huge rift btwn them and they were more keen on creating one btwn them to make their news true.After all this is one of those magnanimous channels which utilized the terrorist attack in Mumbai-Taj hotels for their publicity,what else can v expect from them?

If Dhoni is 70% responsible for India's defeat,this Headlines Today kind of channels is 30% responsible.Just think of some facts.Kapil Dev's dream team was expected to win 1987 World Cup,but they lost.In 2007 World Cup(I mean 50 Overs),Rahul Dravid's men were expected to win the title,but we were crashed out in the first round itself.Again this time Dhoni and co were the favourites and the result is not different from the previous situations..My question is why the hell these media people are hyping cricket this much?Last time none thought India would make it,no media hype.The team under Dhoni was considered as underdogs,but they won.Dont give too much importance to cricket.Media should know its limits.

I would like to share an answer given by legendary writer Mr.Sujatha for a question about media:

Apart from this media,the other category is mad fans.They are burning posters and photos of Dhoni.Last time when India lost in 2007 50 overs world cup,Dhoni's house,which was under construction was demolished.I would say people who involve in such activities are barbaric,uncivilized idiots.Even I have bashed Dhoni,its human nature.We need some means to vent out our anger,it is well and good as long as it doesnt trouble others.

If Dhoni continues this stupid attitude further,he will lose all the respect he gained in a short period of time.

Finally whats my comment on this dismal performance of Indian team?-I would like use one of the quotes of Socrates:

A group of Donkeys led by a lion(Gayle,Collingwood) can defeat a group of lions led by a donkey(Dhoni).

Yes this came in SMS only :D,but I wanted to make use of it.

And I am sorry for such a lengthy post and I couldnt add much humour this time :(.Read this patiently and give your valuable comments :D

Posted by Harish.M at 8:56 AM 7 comments: Links to this post