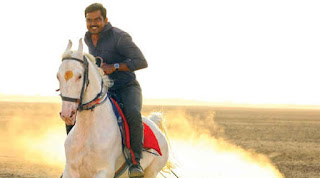 Review may have spoilers.

We have seen lot of cop stories in Tamil cinema and most of them were successful too. Even this year, we had an interesting, entertaining and stylish Vikram Vedha. Theeran Adhigaaram Ondru is different from other cop movies. Theeran is neither like an Aaruchaamy or Duraisingam I.P.S to utter 'naan Police illa porukki' kind of punchlines nor a stylish Anbuchelvan I.P.S. The movie is based on real life incidents. Its based on 'Operation Bawaria' headerd by Mr.Jangid. Theeran goes after the dangerous dacoits who were a nightmare to the public in 90s.

You can easily identify what kind of movie Theeran is, on watching the first scene, after the title card. The police officer asks the trainee cop to demonstrate how would he handle a weapon(knife with blood) from the murder spot and the trainee cop will religiously lift the knife with a white kerchief, on seeing which the senior officer would ask 'how did you learn this? from movies? and the trainee replies yes'. That was really funny and I liked the way the director trolled all other cop movies.

Bose Venkat, plays the inspector, assisting Karthi. He is there till the end and has done well too. The scenes towards the interval were the best part of the movie. You would feel like watching the deadly robbery in person. It was filmed in such an interesting way. I would say, these scenes are one of the best in the history of Tamil cinema itself. So much of realism.

The chase begins after interval. Theeran takes charge of the operation completely though he has a team. Karthi shines as the honest cop Theeran. He doesn't overact, shout or utter any meaningless punchlines. He has a very good screen presence and he has concentrated on his body language and expressions. His calm acting, appeals to the audience and you can hear claps and whistles when he says 'mein bevgunaa(I am innocent)'. But what works for the movie is, the cruel nature of the dacoits. Because you have a ruthless, brutal gang of dacoits, the person who hunts them appears Godly on screen.

The movie happens in 1990s and there is a reference to Vajpayee's Golden Quadrilateral. The movie also refers to the history of 'Kutra Parambarai'. Vinoth had a proper script on paper and has done some research too, before bringing it on screen. Theeran has a good background score by Ghibran and  stunning visuals by Sathyan Sooryan.

The only negative with the movie is the duration of love scenes. They could have trimmed it. I am not a fan of the director's previous movie(his debut) 'Sathuranga Vettai'. I felt it to be a very ordinary film with some good scenes here and there. Its unbelievable that this director, has made a brilliant film like Theeran. A film based on real life incidents is not something new to Tamil cinema. Its difficult to have a racy screenplay for movies based on real incidents. But Theeran has.

Theeran will satisfy both the set of audience,  who prefers artistic films, which concentrates more on script and making and who expect only a racy action film without any boring moments.

This is a terrific movie. Don't miss it.
Posted by Harish.M at 6:33 AM No comments: Links to this post 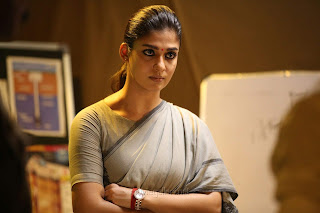 Aram, directed by Mr.Gopi, who filed a case against director A R Murugadoss and leveled charges against director Ranjith of stealing his stories for the movies, Kaththi and Madras respectively, has directed this movie. The Lady Superstar of Kollywood, Nayanthara plays the lead here. Gopi might have lost the case in court, but with Aram he makes a strong statement against those who called him liars. Aramm is a well made, hard-hitting film, with some avoidable communist dialogues.

We have seen lady super stars playing action roles, like Vijayasanthi fighting against a bunch of rowdies or preaching feminism (ex. Jyothika's Magalir Mattum). This is not a movie like that. Gopi doesn't compromise on the script and there are no unwanted scenes. The story keeps moving while he establishes characters. In fact, it takes a while for us, to see Nayanthara, in action.

Aram mainly deals with the villages, that are being neglected by the govt and authorities. There are two different issues shown in the movie - first one is water scarcity and the second one is, resource scarcity in rescuing kids, from bore wells. Yes, most part of the movie, deals with rescuing a child, who accidentally falls down into a bore well. I swear, you will not get bored at any point while watching this movie. The duration of the movie, too is just 2 hours.

Nayan utters some powerful dialogues like "ஒரு உயிரோட விளையாடறோம்ன்ற குற்ற உணர்ச்சியே இல்லாத அதிகாரிங்க இருக்கிற வரைக்கும் இந்த நாடு எப்படி தான் உறுப்படுமோ?", "கிணத்துல விழுந்தது இந்த ஜனநாயகத்தை நம்பி இவங்களுக்கு ஓட்டு போட்ட மக்கள் தான் சார்". The way the movie mocks at the callous attitude of VAOs, police officers, councilors etc, is truly enjoyable. When there is a delay in beginning the rescue operations, one guy questions, will the attitude be same, had it been a minister's son or daughter? There is a reference to a guy, who invented robots to rescue people from bore wells and the director questions, why such guys are not given importance?. Children falling into bore well has become too common nowadays, and some serious steps needs to be taken to resolve this problem.

While it is true that still there are lot of villages without a solution for water scarcity and their honest demands being neglected often, the comparison with rocket launching doesn't make sense at all. Right from the beginning, there's a reference to rocket launching and if you think patiently, you can only feel it doesn't make any sense.

It is the duty of the govt and authorities to focus on everything - both public welfare and infrastructure development. Expose on how the poor and downtrodden are neglected is a much needed one, but taking a dig at infrastructure through mass media, is not the right thing to do. There are different departments to deal with different issues, because those responsible for providing basic facilities, should we derail the growth of other departments too?

The TV discussion scenes (with news 18 Guna, Muthukrishnan I think) was a total let down. In reality, our media has not done anything useful. At least in movie, Gopi could have shown the media doing something interesting.

Nayanthara has a very good screen presence. She has done her part very well. There's nothing ugly, in the name of experiment. She knows her strengths and has played it smart. Not everyone has the charisma as Nayan has and that is why her dialogues are well received. Though the performance of everyone is natural, Ramachandran Durairaj, the one who plays the father of the child, was just stunning. After a while, he doesn't get too many scenes, but he makes an impact. While the village, attitude of officials, performances are too natural, the interrogation scenes between Kitty and Nayanthara was too artificial and the climax was kind of filmy.

Only if you are confident with your script, you can make a 2 hour Tamil movie with most part of it showing the rescue operations. The theater response was encouraging too, there was no sarcastic comments from the audience side and they didn't fail to whistle and clap for some scenes. Finally, Gopi has tasted success with a sincere film. Congratulations Mr.Gopi!!!

Aramm is good and don't miss it.
Posted by Harish.M at 5:56 AM No comments: Links to this post