Madrassa students attack and a twist in the tale 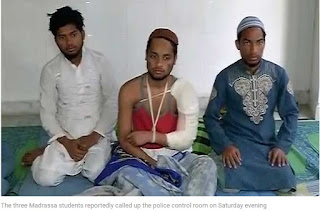 2 days before - in Delhi - 3 students, well, 3 Muslim students, were beaten up. Camera starts rolling, these students cry 'intolerance'. They openly alleged that they were beaten up for not chanting 'Bharat Mata ki Jai'. And an elderly man(not sure if he is a politician or some 'secular fellow'), starts blasting the culprits and accuses Narendra Modi for what has happened. He demands an apology from the Prime Minister. As usual, our peace-loving brainy journalists, started protesting against the incident, through their 'fiery tweets' and certified this an act of 'communal' intolerance. The same people, who abused 'Hindus' for communalizing the 'peaceful murder' of a dentist. Now there is a twist in the tale. After the police investigation, the students changed their statement and said they were not beaten up for not chanting 'Bharat Mata ki Jai'. They admitted that, they were not asked to chant anything but instead had gotten into an argument which escalated and a few blows were exchanged.

" they were not asked to chant anything but instead had gotten into an argument which escalated and a few blows were exchanged."


This post is not about Rajdeep Sardesai or secular champions. What made this boys to openly lie in media? So they were aware of the consequences of such incidents and if a Muslim plays the victim card intelligently, they can conveniently hide the truth. How they are able to spread lies boldly in media? What inspired them to do this? Think patiently, you will understand, even the fight for a pencil or slate between a Hindu and Muslim kid was projected as an act of communal violence accusing the Hindu kid.This is not a joke. This is a fact.

Had this incident created clash between the two communities, who will be blamed for that as well? As usual you have a Narendra Modi to blame. None of these morons who supported these Muslim boys, apologized later. Why would they? Afterall their intention is to project as if minorities are under threat in India. This is a very bad trend. Beware of the lies spreading in mainstream media and twitter/facebook accounts of poisnous fellows. Well, such posts are being taken down by facebook and the people who are posting anything in favor of Hindutva groups are being blocked by facebook too. 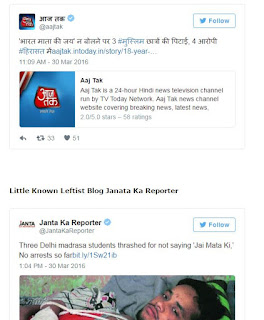 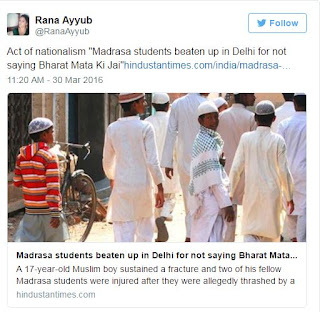 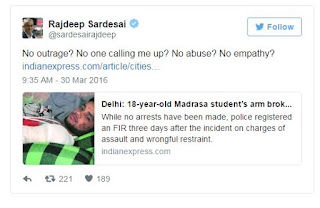 Posted by Harish.M at 11:30 AM No comments: Links to this post