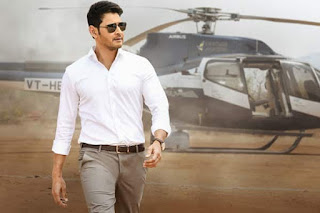 Bharat Ane Nenu is good. It starts with an usual intro song, but soon after the song, the actual story begins. It's an out and out political movie with commercial elements. I think after a very long time, a good movie for Mahesh Babu. He has boldly acted as Chief Minister, something which many mass heroes would not do.

There are some scenes which shows how irresponsible our society is, especially the traffic violations. You just have to clap for those scenes. When Mahesh Babu imposes heavy fine for traffic violations(for ex : Rs.30,000 fine for driving in wrong side). Actually, there was good response in theater. Not sure, those who clapped for the scene, would welcome the same rules if imposed in reality.

It's refreshing to see a CM, while going to assembly, seeing a girl in bus stand, calling her for a coffee, falling in love with her. Don't ask, even in a political movie, should it be like this? Those scenes were enjoyable. There is also a scene about private schools swindling money. His own party seniors betray him on a CB-CID inquiry. Those scenes were good.

The first half, had heroism, within a story. It had an interesting interval block too. The second half was totally different. Infact we can say the first half half was in one genre and the second half is in a different genre. The pre-interval scenes were like how a young man, who returns from London, due to his father's death, changes the system. But before the hero could change the system completely, the director has changed his mind it seems.

Take diversion from changing the system, its time to unleash the hero Mahesh Babu. He challenges the villains, fights all alone, beats a bunch of rowdies, dances with heroine etc. I would not say it wasn't good. Those scenes worked out too. mainly because of Mahesh Babu's charisma and electrifying screenpresence and terrific BGM by DSP. Without DSP, I doubt, the impact would have been same.

The movie doesn't spare media too. Of course, a political drama would be incomplete without importance to media. In this movie, media is so powerful that it is able to bring some 'change'(dont want to reveal). Whereas, in real life, I doubt if they would be able to do that to a CM. I have heard about one CM, who had a daughter and her mother was not his wife. When a journalist reported this, a defamation suit was filed against him and he was arrested. Later, that CM confessed it in his own style, saying that the woman was not his wife only his daughter's mother. Media used to wonder at his oratorial skills for comments as mentioned above...It has been almost 40 years, still the incident is in news. Anyway that's a different story.

Had only a thoughtful first half was backed by a similar second half, Bharat Ane Nenu might have ended up as an epic. Koratala Siva could have thought about it. Anyway, the movie is good and it will be a commercial blockbuster too
Posted by Harish.M at 10:09 AM No comments: Links to this post 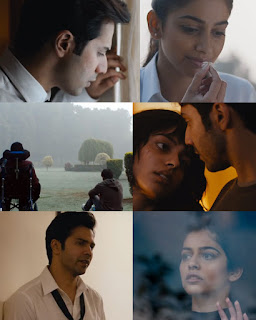 If you are planning to watch this movie and don't want to know anything about the movie, you can skip this review.

October is good. it starts off slowly with some funny moments and after a point, it turns serious and you just can't take your eyes off the screen... a simple story with a brilliant writing and excellent performance by the actors will create an impact.. this is different from the usual love stories... the best part is, here you can only feel the love, neither the hero nor the heorine expresses it through words...
That was a splendid acting by Varun Dhawan...in not even a single scene he goes overboard. he is too casual either while chatting some nonsense with the hospital staff or showing unconditional love and care towards the heroine(Banita Sandhu). there were no romantic moments between them before that incident, yet whatever Varun did cannot be interpreted as sympathy. somewhere deep inside he has feelings for Banita and after that incident, it becomes stronger. Banita has a good screenpresence. she doesn't have too many dialogues and can't show different expressions too(her character is like that), yet she makes it sure that you feel for her.

October is an emotional drama. In such movies, each and every character is important. The director has handled it very well and that is what works for the movie. Every single character knew their limits. You may not recognize their performance while watching the movie, but if you think for a while, after coming out of the theater, you will understand their worth(everyone, starting from the lead actors to supporting cast). You will never feel anything artificial while watching the movie. They have given a disclaimer in the beginning itself that this is a pure fiction and they have no intention of encouraging any form of superstition. So don't get into scientific details like whether fragrance can have an impact on a coma patient etc. those scenes were touching.
In one scene, Banita arrogantly refuses to cooperate with the doctor and the hospital staff. Varun says, 'I know you are angry. Don't worry, I will not leave you and go again'. After hearing this, a convinced Banita, would try to smile. This is the best scene in the movie(or I should say my favorite scene). So much of impact Varun has created on a coma patient, through his love and affection, that when she slowly starts gaining consciousness, she wants Varun to be with her.
I only didn't like the climax. It doesn't mean climax wasn't good, but it could have ended on a happy note. Still it might have left the same impact on you.

Anyway, October has an emotional love story with some cute moments. Don't mss it .
Posted by Harish.M at 10:28 AM No comments: Links to this post