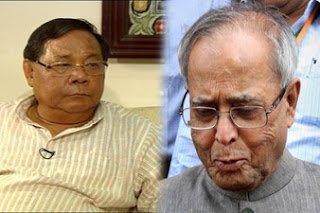 Race to 'Raisina Hill'..What does it mean?What's the race mentioned here and what's that raisina hill?

"Raisina Hill is an area of Lutyens' Delhi, New Delhi, housing India's most important government buildings, including Rashtrapati Bhavan, the official residence of the President of India and the Secretariat building housing the Prime Minister's Office and several other important ministries. It is surrounded by other important buildings and structures, including the Parliament of India, Rajpath, Vijay Chowk and India Gate.

Initially the BJP wanted to field Mr.Abdul Kalam as its presidential candidate.But their own coalition partners(read JD(U) - Sharad Yadav and Nitish Kumar) were against the idea.They conducted some meetings to finalize their presidential candidate.But no consensus was achieved and finally the JD(U) decided to support Pranab Mukherjee.Ofcourse,the nomination of Pranab Mukherjee itself did not happen just like that.That's a different story,will come to it later.Now let me focus on the oppositions.

This was the reason given by JD(U) - "JD(U)'s support to the UPA nominee Pranab Mukherjee in the presidential polls was in appreciation of his stature as a seasoned and respected political leader with vast experience".The BJP wanted to nominate Dr.Kalam as its candidate.Is Pranab's stature so bigger than Kalam's?As a finance minister,what was Mr.Mukherjee's contribution? He couldn't control inflation,price hike anything.He is a total failure as a finance minister.But simply to keep BJP at a distance,especially to show your hatred against Modi,you people are supporting Pranab.Mr.Sharad Yadav and Nitish Kumar should understand this - having an alliance with congress will be suicidal..

'Secularism' - the Congress party has been cheating this nation for more than 60 years using this word.For the congress,upliftment of Muslims and Christians is more important.But they will not support Abdul Kalam. Reason is simple - Abdul Kalam is a BJP sponsored Muslim.The congress actually wanted to make the country's present Vice-President Mr.Hamid Ansari as the president,unfortunately due to Mamata Banerjee's approach,they couldn't go ahead with Ansari.Didi(Mamata) ji wanted to dictate terms to congress.Mamata Banerjee is known for her arrogance.So the congress party should have thought,if they announce Pranab,who is a Bengali, as their candidate,Mamata Banerjee will support him at a later point of time. She is still playing her cards close to chest and she will continue to play even after the game is over. And Mulayam Singh Yadav betrayed Didi ji,to reduce the importance given to her in UPA.

This is how Pranab Mukherjee became the UPA's presidential candidate.The BJP tried har to project Kalam as their presidential candidate,but,for Pranab Mukherjee,opposition came in the form of P A Sangma.It was an intelligent move by the Tamil Nadu CM to support Mr.Sangma.He was nowhere in the picture.All of a sudden he was announced as the presidential candidate and this move of her was backed by the Odisha CM Mr.Navin Patnaik.She,initially sought the support of the BJP too.But the BJP thought announcing Kalam as their candidate will get more support.Unfortunately,the BJP was completely cornered by its own alliance parties itself.After a long confusion,finally left out with anyother option,the BJP announced its support for Mr.Sangma.

BJP's desire to field an opposition candidate is understandable.We all know,how the congress governors act in the opposition ruled states.The likes of H R Bharadwaj and Kamla Beniwal are enough to support my above statements.They act as opposition party in non-congress ruled states whereas a governor is supposed to act impartially.This clearly shows the congress using governors as their puppets.And we had a puppet as president for the past 5 yrs and we have a puppet as Prime Minister for the past 8 years.

P A Sangma's nomination was not supported by his own party.Sharad Pawar's NCP wanted Sangma to quit his party if he want to contest the presidential elections.He quit his party.But still he is contesting as Tribal candidate.Yes ST.I came across some news items related to the presidential polls recently.Some Muslim organizations wants a Muslim to be the president while some Christian organizations want a Christian President.And here is a candidate who openly claims that he is not contesting on behalf of his party and instead he is contesting as a Tribal.Its really painful to see caste and religion in everything.Anyway Sangma served as Lok Sabha speaker and has a good reputation too.Initially I thought Jayalalithaa's this move to support Mr.Sangma as a not-so-worthy move.But she proved me wrong this time and this is a master-stroke.

Sangma will lose.Pranab Mukherjee can very well enter the Rashtrapathi Bhavan today itself,as he is going to be the next president.But the rules will not permit that.But I would like to highlight some facts with respect to Sangma.We have the grand old politician of Tamil Nadu,Mr.Karunanidhi,who always says,it was Brahmins who spoiled the state/nation,is now supporting a brahmin and opposing a tribal candidate.A Dravidian party, which claims the Aryans(brahmins) as its enemy,is now supporting an Aryan.

"A Dalit will be PM in 40 years" - this was the statement made by our intelligent home minister Mr.P Chidambaram.I think Chidambaram is too confident that his party will be in power for 40 more years. As long as his party is in power,no Dalit will ever become a Prime Minister.It was the congress party,which spoiled the chances of Babu Jagjivan Ram becoming the Prime Minister,using the then president Mr.Neelam Sanjeeva Reddy.And now its opposing the ST candidate Mr.Sangma.The congress calls itself a secular party.Being a secular party why cant they support a Muslim(Abdul Kalam) or tribal(Sangma). The logic is simple. For Karunanidhi or Congress,the minority,secularism,dalit upliftment everything is a vote gaining technique.

Sangma said,he will become the president,if a miracle happens.Mircales doesn't happen too often.Whenever you are expecting a miracle to happen,it will not happen.Appreciate the spirit of some of the opposition parties to atleast field a candidate against the congress.
Posted by Harish.M at 10:44 AM 2 comments: Links to this post