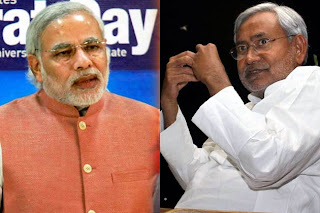 Every state hates this Congress govt for so many reasons.The common reason is corruption.This UPA govt is facing allegations of corruptions of large magnitude.Still political observers and analysts are not ready to write off congress in the upcoming Lok Sabha elections.The main reason is lack of credible opposition.As of now,the only national party which can be considered as an alternative to the congress is the BJP.If the BJP wants to maintain this reputation,it should take some bold decisions.

All these years,the BJP went for elections banking on the charisma of its Prime Ministerial candidate.In 96,98,99 and 2004 it was Mr.Vajpayee.In 2009,it depended a lot on Mr.L K Advani.Whether they won or not is a different question,but the party is still in power in 5 states and in coalition in states like Punjab and Bihar.The 99-04 Vajpayee govt was far better than the previous govts and they faced the elections with the slogan 'India Shining'.Though the BJP lost the elections,it didn't lose the credibility.This is because the party took the decisions on its own.It stood for its ideology.All its allies were on the same page - their common enemy was Congress.There was a discipline in the party.Everyone were controlled by the central leadership. One of its popular leader,Uma Bharati, was expelled from the party for showing disrespect towards Advani.

But now the situation is not same.The principal opposition party is struggling hard to make any decision.Being the largest party in NDA(National Democratic Alliance),still its not able to announce its PM candidate.A section of people are of the opinion that if the BJP announces Narendra Modi as its PM candidate,it can individually form the govt.People belonging to this section don't know anything about a world outside facebook/twitter.Atleast 50% of online Modi supporters will not vote in the upcoming elections,as they will be either abroad or their name will not be there in the voter list.That's all about the online Modi fans.Let us come back to reality.

Will the Narendra Modi factor help the BJP in the upcoming Lok Sabha elections?The answer is big YES. To what extent?BJP and its supporters/sympathizers should try to find an honest answer for this question.If you are going to say,announcing Modi as PM candidate itself will give the halfway mark of 273 seats in the Lok Sabha elections to BJP,then you are a Modi fanatic.But Modi is the most popular BJP leader in India. He is the darling of corporates.Lakshmi Mittal,Ambanis,Tatas everyone will be pleased with the announcement.The middle-class people are expecting a lot from the man.Youngsters,first time voters may also contribute fairly to the 'Modi-voters list'.Compared to Advani,Modi has more support and less haters(this doesn't mean Advani is bad..Advani is a very good statesman in politics!!).Modi is more popular in villages compared to even Manmohan Singh.There are Modi haters too in large number.But the BJP in general has some haters.Even if they project someone like Arun Jaitley as their PM candidate,this hatred will be there.But the party will surely lose the pro-Modi votes if it projects anyone other than him as its PM candidate.

Projecting someone like Sushma Swaraj as PM candidate will not inspire the voters.So considering all these possibilities, Modi for PM will be the right slogan for the BJP in the upcoming LS elections.By projecting Modi as its PM candidate,BJP may emerge out as single largest party.

But the BJP is hesitating to make this announcement.They are more concerned with the appeasement of over-ambitious fellows like Nitish Kumar.Nitish Kumar has made a mockery of himself on so many occasions in the name of being secular.Anyone with common sense will laugh at Nitish Kumar's foolish statements.There is a perception among most of the social activists in India that being secular is being anti-Hindu.This Nitish Kumar has given a new definition to secularism.Being secular is being anti-Modi. Once he shook hands with Modi in NDA Chief Ministers meeting.Immediately,the great Lalu Prasad Yadav questioned Nitish's secular credentials.Shaking hands with someone will not make you communal is what I believe.So Nitish gave some answer to convince Lalu.

According to Nitish,Modi is communal and anti-Muslim politician.If that is the case,why Nitish Kumar is still in alliance with BJP?Why did he fight the 2010 assembly elections with BJP?If he feels Modi is responsible for the 2002 post Godhra riots,he shouldn't have continued in the alliance anymore.But he fought the 2005 and 2010 assembly elections with the alliance of BJP.And on both the occasions the alliance got landslide victories.Will Nitish Kumar say that people voted for him just because he spoke against Modi?He claims he has developed Bihar to a great extent and its growth rate is much more than Gujarat.If this is true,still why he wants the Central govt to grant 'backward' status to Bihar?He was railway minister during the Godhra incident took place.He could have very well walked out the alliance during that time itself,but he didn't.

Actually he made use of BJP as much as possible and established himself as a strong leader in Bihar.There is no doubt that Nitish Kumar is the most popular leader in Bihar and his govt has given a peaceful life to people of Bihar.When Lalu Prasad Yadav was in power,goondas used to capture poll booths.Rowdyism was at its peak and there was no law and order at all.After Nitish Kumar came to power,the situation changed.He has given a reasonably good government all these years and very well deserves yet another term as Chief Minister.People are ready to give him another term,but is Nitish ready to accept it?

He seems to be over-ambitious.He might think his anti-Modi stand might give him a 'secular' image and as a result,a group of non-congress and non-BJP parties might propose him as their PM candidate.Or he might be even thinking of an alliance with Congress.It has been long since we have seen him attacking the congress or the central government.All these years if he has spoken against someone means - it is Narendra Modi.If either of this happens,Nitish Kumar will feel for it later.Atleast as of now,a third-front govt in India will remain a dream.Without the BJP or Congress its not possible for any party to form a govt.

During the 2009 elections,Odisha CM Mr.Navin Patnaik walked out of NDA playing the secular card.This incident gave a very bad image to the BJP.It demotivated the BJP workers to a great extent.This was one of the main reasons for BJP's bad performance in the elections.Nitish will very well do this to NDA this time. Instead of trying to appease him,the BJP should concentrate on gathering support for Modi.It should boldly announce Narendra Modi as its Prime Ministerial candidate for the upcoming Lok Sabha elections.If they start working from now on,they can emerge as single largest party.Last time they gained some seats in Karnataka,this time they are sure to lose in Karnataka.But this time they will have gains in Rajasthan.Last time BJP won around 4 seats in Rajasthan,this time they may win upto 17-18 seats.They should give some liberty to Vasundara Raje as she is one the popular BJP leader in Rajasthan.Likewise,the BJP should strengthen its hold in the states where they have presence.

They should also try to get as many parties as possible into their alliance.They should target 20 LS seats in UP.If Nitish Kumar has a problem with nominating Modi for the top job,the BJP should ask him to leave the alliance.It is learnt that the BJP can win around 15 seats in Bihar on its own.In AP they should join with Chandra Babu Naidu's party and TRS party.They can't win anything in TN and Kerala.Still they should try to split the votes and spoil the chances of the Dravidian parties.Only then the fake secular remark will vanish from Indian politics.

As mentioned above a lot needs to be done.If the BJP fights the 2014 LS elections under the leadership of Modi,with proper field work,BJP can emerge as the single largest party.If it emerges,then there will be only two possibilities.Either,there will be a post-poll alliance.The secular SP,DMK,BSP,ADMK etc., might support the BJP and they can form a govt.Or,we may see a non-BJP govt.That is,a non-congress Prime Minister(like Deve Gowda or Nitish Kumar :D) with the backing of Congress.If this is going to happen,then the govt will not last for more than 2 years.Again there will be elections.

Projecting Modi,will put the BJP back-on-track and will reimpose some faith on the party.People will think twice to play the secular card to corner Modi or BJP.So whether Modi becomes PM or not,is not something the BJP should worry about.Instead it should realize that it is a national party and it should call the shots.If the BJP wants to survive,it should announce Narendra Modi as its PM candidate and fight the elections boldly, irrespective of the outcome of the elections.People like Nitish Kumar should be given 'proper' treatment.
Posted by Harish.M at 12:32 PM No comments: Links to this post