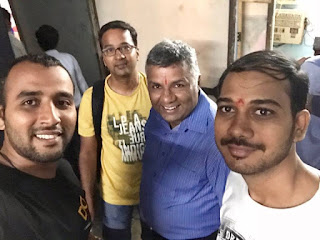 Valai - after a long time, watched a drama... i have watched stage some plays long back, but this is the first time in auditorium. It was a pleasant experience actually, thanks to my friend Ganesh Krishnamoorthy for inviting me...

I have watched dramas of my favorite Cho,Crazy Mohan etc... also some dramas of SVe Sekar and some not so popular dramas too.But this one was unique in its own way... its all about technology and how we use it... They have created an ODC like set on stage with computers, laptop, manager cabin, doors with access, swipe in swipe out etc. It was so natural.
Without a proper script, especially, sharp dialogues, a drama will not work out... Valai has a proper script on paper, some fantastic dialogues and brilliant performances... The script deals with programming and artificial intelligence... Heard the script was written by Mr.Srivatsan... I liked this man for 2 reasons... One is, the script was brilliant... Though everyone acted well, I liked the appa character and Maya more...

Mr.Srivatsan and the dummies drama troupe is celebrating 20 years.He started off by referring to Cho... He referred to Cho's Mohhammed Bin Thuglak dialogue 'Batuta, edhai ninaithu aarambithome, indru indha nilayil irukkirom'.He related this dialogue to his dummies drama troupe celebrating 20 years... and today, Valai was inaugrated by veteran playwright Mr.Mali.He has been in the field for more than 60 years and has staged 100s of dramas.
The second reason for liking Mr.Srivatsan : he played Sujatha in the play.Yes there is a scene, in which Writer Sujatha, who is also a techie, plays an important role.It was too good.As mentioned earlier, Valai deals with AI(artificial intelligence)... Sujatha is known for his novels and articles on artificial intelligence. And in Valai, there is a dog, which is based on artificial intelligence. Mr.Srivatsan says 'en baashaila sonna, andha naai bommai thaan, avaloda Jeno'.I was clapping happily hearing all this. I also met him and spoke with him for a while, again thanks to Ganesh.
I proudly introduced myself as a Sujatha fan and the man joined with me and said 'we are Sujatha fans' and had a brief discussion about En Iniya Iyanthira, Meendum Jeno, Computer Gramam, Kolaiyuthir Kaalam, Nylon Kayir, Computereh oru Kadhai sollu etc.
His performance in Valai reminded me the Computer Engineer 'Iyengar' in Sujatha's novel 'Sorgatheevu'.

Such a brilliant piece of work it was and it was worth the precious time spent.
Posted by Harish.M at 12:08 PM No comments: Links to this post