She is my friend.. 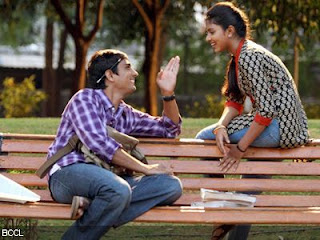 This is not a fiction.Neither going to be a breezy article about a girl in my life.Neither this is about the movie 'Kadhalil Sodhappuvadhu Yeppadi'.Without making a conclusion about this article,just read on.

This debate is going on for ages in India, especially in Tamil Nadu.How can a girl and boy be just friends?If a guy shows some care and affection towards a girl,it has to be love - this is how most of the people argue.When the guy and girl disapprove this and say they are just friends,none is ready to believe.The venomous words used by the surrounding people may spoil a good relationship.This mentality is actually a main reason for most of the problems faced by women.

Right from school days,elders start controlling the kids.There are co-education schools which run separate classes for girls and boys.In such schools,if a teacher finds a boy talking to a girl,it will be made a huge issue and the boy and girl will be punished severely.They have to listen to all rubbish and advices of the teachers and parents.In some schools,even a watchman and peon,will start advising the students.Such activities will have an impact on both the boy and girl.

Not only in schools,even in some colleges,they follow this rule.This rule applies to anyone who enters the college campus.That is,not only to the students of the college,but also anyone else,a visitor,other college students etc.I have visited one such college during my college days.I went there to attend a campus interview. I was allowed to travel in their college bus.The bus was looking normal from outside.I was really confused after getting into the bus,because there was an iron rod placed in between the seats.I asked their college student the reason for keeping that rod there.It was kept there to separate the seats between girls and boys. Girls should occupy the seats in front of the rod and guys should occupy the seats behind the rod.So it was a boundary line.If a guy or girl crosses the boundary,they will be punished severely.They may even go to the extent of calling the parents and they will abuse the girl/boy or even parents in an ugly manner.Barbaric people.Then I thought,if scoundrels and rowdies run an educational institution,it will be like this only.But later on I realized that not only scoundrels,even the so called educated elite society behaves in a similar manner. Well,regarding that campus interview,I got rejected,that's a different story.

One cannot simply move on saying these are all common in schools/colleges.Education should help for the betterment for the society.These type of activities are indirectly responsible for gender related problems in society.Today the main problem faced by girl or woman or even a small kid is - sexual harassment.Nowadays we come across lot of disturbing news items,teacher harasses a second standard girl sexually,60 year old lady raped,harassment in work place..Bloody why all this happens?The male chauvinism has grown up to such an extent that people justify these acts saying "the girl's dressing was too bad.If ladies expose more,these things will happen".What if a girl exposes?Don't you have self-control? Ok, what did a sixty year old lady expose to get raped?What mistake did a 7 year old kid commit to get harassed? These are all excuses to justify one's mistake.Well this doesn't mean I suggest everyone to expose their body,but the point is don't give this as an excuse for your mistake.

The newspapers like Times of India and 24/7 television news channels like Headlines Today,Times Now etc seems to be more interested in increasing their circulation and TRP rating by sensationalizing rapes.An anchor comes in a neat coat-suit and one politician from 2 or 3 parties,one social activist and one human rights activist will participate in the debates.It will be painful to see the human rights activists defending criminals.But whats more painful is,not a single debate in these tv channels tried to make a proper analysis on why woman are harassed everywhere.

If a man respects a woman,he will not harass her.If a boy sees a girl as a fellow human being he will not torture her.Instead he sees her as an object who will give him some pleasure.This type of mentality makes men go to any extent in torturing ladies.When a teacher fails to realize that the girls to whom he is teaching  are also human beings and they deserve some respect,he abuses them sexually.This chauvinistic mentality varies from person to person depending on their lifestyle.

People stoop to the lowest level using the term 'friendship' to satisfy their physical needs.When a guy says a so-and-so girl is his friend,the immediate response from other guys,who are his 'good friends' will be 'introduce her to me'.'Give her number to us','I will add her in facebook'.Why should he introduce the girl to you?Or why should he allow you to send a friend request to her?And shamelessly they say 'I want to be her friend..whats wrong in this..I dont have any bad intention,why are you insulting me' - these kind of replies the guy will get.According to these guys,only an unknown,but fair girl will be their 'best friend'.If the same girl happens to be dark skinned but highly talented in drawing or singing or writing etc,how many guys will send a friend request to her?


Some guys even shamelessly will say that all they wanted is to correct that girl.When someone argues its a mistake,they give an immediate justification - 'Men will be men'.I don't really understand the meaning behind this phrase.So these guys mean to say that men will keep on enjoying with different girls and thats their nature?Or do they mean 'a man can see a woman only as a sex object?'. Even pigs and dogs do this.Whats the difference between them and these guys?They are animals, better than these guys,because they have only 5 senses.And these guys will speak about culture and tradition.

Guys first of all understand - it is very much possible for a boy and girl to be friends forever.Taking a girl in bike,talking for hours in phone,sharing some personal stuff all these things need not necessarily be love.In friendship boys and girls should be treated equally.Even after marriage and having kids,the boy and girl can still be friends.When guys start moving with good girls and respect their friendship,they will get a sense of maturity and they will not harm girls.I have seen guys saying lot of bad things about girls.They will say girls are cheats,girls never understand true love/affection etc.There may be girls like this,but generalizing is wrong. There are lot of good girls.If you say you haven't come across any,then the mistake is with you.If you approach everyone with some good intention,you will get to know good people.Ofcourse not everyone will be good,but most of them will be.Instead of saying 'she is bad,she cheated me,all girls will be like this only..I hate girls',think this way - 'ok there are lot of good girls,she is an exception...'.Instead of showing hatred towards women in general, because of the mistakes of one or two girls,ignore the wrong ones thinking about women with good character,who are more in number. Guy its enough if we respect our female friends as much as we respect our mom and siblings.


The topic of consensual/premarital sex is different.I will write about it separately.

So the bottomline is, for a guy doing a white collar job and who has no respect for women - it ends up in a physical relationship with girl,for a half baked teacher,it ends up with sexual harassment,for scoundrels and morons,it ends up in brutal rapes.If this has to change,guys/men should start respecting girls/women.Parents should teach their son that girls are not toys to play with,they are human beings with feelings. Schools/colleges/teachers should teach their students to respect each other.Boys should respect the girls and vice-versa.The govts should conduct some camps to stress the importance of woman.

The recent judgement of awarding death sentence to criminals involved in the Delhi gang rape case is a welcome one.Nothing wrong in hanging those morons.Still intelligent people argue this punishment is too high and call it a human rights violation,but they conveniently forget the fact that the girl who died was also a human being.Making tough laws and awarding severe punishments may instill a sense of fear in some people and like this,the death penalty may reduce the rate of rapes to some extent.But what will actually bring down the no. of rapes is - prompt action by the police.Instead of insulting the girl who files a complaint by asking sarcastic questions,the police should register the complaint and act immediately to put the culprits behind the bars.The rapists should not be given the privilege of filing a mercy petition with President.

Change in people's mentality will only completely eradicate crimes against women.