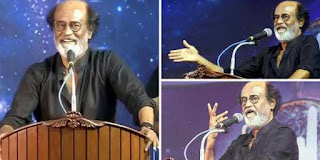 Rajni is again in the news, the reason is same, the age-old-political-entry stunt.. There memes doing rounds against Rajni thinking that he is a RSS man,BJP fellow etc.Well I don't agree with the statement that actors should not join politics. India is a democratic country and anyone can join politics. But, why am I criticizing or mocking Rajni?

He has been making political statements since 90s and some of them were hilarious. In 90s, 'Thamizh Naattil vedigundu kalaachaaram paravi vittadhu, Jayalalithaa aatchiku vandhaal Thamizh Naattai Aandavanaala kooda kaappatha mudiyadhu' etc.. Well, there is nothing wrong in making political statements too. Now we have twitter/facebook/whatsapp etc where almost everyone is a journalist, a critic. So there is nothing wrong in making statements too. But he used his fans for his personal gains. In 2004, I have witnessed Rajni fans campaigning against PMK and they were distributing the audio cassette with Rajni's speech. He will 'voice' out his support during elections and his fans will be doing all the field work. If you are not sure about your political ambitions, why do you involve your fans in such activities?

In 2004, he opposed PMK and gave a speech against the party and urged the people to defeat PMK. But PMK won all the 6 seats it contested. Rajni didn't have a face to acknowledge the defeat.He either underestimated the Tamil Nadu electorate or overestimated himself. How can a 45 minute speech make a difference in politics - which is fulled with caste,money,alcohol,biriyani,rowdyism,religion etc? I still remember that speech, it would end up like this 'nanbargalidam thanjam pugundhu vittadhaal, idhark mel vimarsikka manam varavillai' -  PMK was part of the DMK led alliance then, so (D)MK was Rajni's nanbar and he is not going harsh against PMK.. He thought, a 15 more mins of his speech would totally wipe out PMK. This clearly shows, Rajni has no idea about politics.

He released the first look of his 'Jaggubhai', exactly on the day of elections in the year 2004, posing himself as a Muslim. The moment, Tamil Nadu Muslim Munnetra Kazhagam objected to it, he dropped the project. I agree, cinema is a multi-crore business and none would like to face losses. But Rajni, cleverly used the mass media to his advantage. Had PMK not won those 6 seats, TMMK might not have objected Jaggubhai and Rajni might have ended up with another commercial blockbuster. There was a tagline in Jaggubhai - 'Iraivaa, nanbargalidamirundhu kaappaatru, pagaivargalai naan paarthu kolgiren'.Then something happened(heard one Saamiyaar mediated between Rajni and Ramadoss and they became friends. No, that was not Jayendrar).

So Rajni is someone, who did not have a face to meet the public, after a virtual defeat. He did not have the guts to field a candidate on behalf of him, against a party, that attacked his fans. He is someone who thinks his words are more than enough to influence the outcome of an election.He is someone who endorsed DMK-TMC in 96, defended the DMK govt during Coimbatore bomb blasts, offered a half hearted support to BJP in 2004. Before entering politics itself, he has switched sides :D If there is someone who has committed lot of political blunders, without being in politics, then it can only the Superstar Rajnikanth.

After 12 years, now again, he started it.

Jayalalithaa is no more, Kalaignar is inactive in politics, so Rajni thinks, he can try his luck again. Personally, I dont have a problem with Rajni's political entry. He can start a party or join any party, that's his wish. If his approach is convincing, he may be successful.

I am perfectly ok, with any actor, becoming a politician or CM. As if we have only true leaders in active politics. But the criticism against Rajni is valid and would continue for the reasons mentioned above. If Rajni really joins politics and his approach gives some hope that he would be better than the existing parties, we can appreciate him. As of now, I don't have any hopes on Rajni.
Posted by Harish.M at 11:31 AM No comments: Links to this post