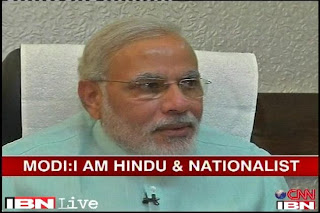 Its time for some secularism here.I have written what kind of 'secularism' is being followed in India so many times on this blog.Not it all has started again.The saviors of minority communities are back.The patriots are back.The good old warriors like Mr.Mulayam Singh Yadav,Digvijay Singh etc and new entries like the Janata Dal(United)[JD(U) are back with a bang.Reuters interviewed Mr.Modi recently.Now the secular camp and intellectual media says 'Modi is in trouble with his controversial remarks'.They are even demanding an apology from Modi.So what did Modi say?

Do you regret what happened?I’ll tell you. India’s Supreme Court is considered a good court today in the world. The Supreme Court created a special investigative team (SIT) and top-most, very bright officers who oversee the SIT. That report came. In that report, I was given a thoroughly clean chit, a thoroughly clean chit. Another thing, any person if we are driving a car, we are a driver, and someone else is driving a car and we’re sitting behind, even then if a puppy comes under the wheel, will it be painful or not? Of course it is. If I’m a chief minister or not, I’m a human being. If something bad happens anywhere, it is natural to be sad.

The translation could have been bit better. Modi said :


You can watch this in the above video.When you translate this exactly we should put it as "even then even if a puppy comes under the wheel,will it be painful or not."

Well these are the two comments which has angered our secular camp.The first objection is to the use of the term 'Hindu Nationalist'.If the objection is for the use of the term 'Hindu Nationalist',it should be raised against the interviewer not against Modi.It is said that India is a Hindu majority country, but the situation is so bad that if someone says he is a Hindu or he follows Hinduism,he is branded communal in this nation.So what is the expectation of the secular camp?If the interviewer asks 'are you a Hindu Nationalist',Modi should say 'no I am only a nationalist'.Atleast this is what Arnab Goswami expects.


Let us assume that Modi said 'no I am only a nationalist not a Hindu nationalist'.Do you people think this media and secular camp will keep quiet?No,instead they will call this a publicity stunt and minority appeasement.Intellectuals like Teesta Setalvad and Mallika Sarabhai will politely say in the media that 'such statements will not erase what Modi did in 2002'.The Supreme Court appointed SIT itself has given a verdict that Modi had no role in the post Godhra riots,but still our media and secular camp is not ready to accept this,still they want to punish Modi.If they think they are better judges than those sitting in Supreme Court,then its upto them.


Intellectuals please understand this - you don't have any right to stop us from following Hinduism.The Indian constitution allows us to do so.

Being a Hindu will not make one communal.Modi's statement will not disrupt the peace and harmony, but the activities of the secular camp for sure will.

Coming to the second answer,the puppy remark,I have already shared the exact question and Modi's answer for the same with video and translated it too.Likes of Arnab Goswami wants Modi to say sorry for what has happened in 2002.Are you guys mad?Why will someone accept the blame when they have not done anything wrong?There is a court,it has appointed a Special Investigation Team(SIT) to probe this matter,based on the requests of secular activists.The SIT was monitored by Supreme Court and it itself has given a clean chit to Modi.There is a CBI,which is trying its best to frame charges against Modi and still not able to provide any concrete satisfying evidence.When so many things are going on,on what basis you expect Modi to say sorry?


There is a problem with Indian media.They think they are Gods.They want everyone to behave the way they wants.Practically that is not possible.Regarding the puppy remark, Modi only says what has happened in 2002 was really sad.And his answer should be interpreted as 'what has happened in 2002 was painful.There were riots of a very large magnitude.58 Hindu kar sevaks were burnt alive ALLEGEDLY by some Muslims and following which there were religious clashes between Hindus and Muslims.It has been 11 years since then and there were no riots at all after 2002.People are living peacefully.Gujarat is growing.Its time to move on'.

I came across this interesting status update from a profile(his name is Mr.Seshadry Narayanan).

"Do you beat your kids?
Answer: I don't even beat my dog.
Media and Congress: You mean your kids are like dogs?"

The media and the secular camp is behaving exactly like this.Anyhow,Modi only said he was saddened by what has happened in 2002.Riots means we all think of 2002 only.Friends there was a state sponsored genocide which happened in 1984.The anti-Sikh riots,for which till now justice has not been delivered.Just because 2 Sikh terrorists assassinated Mrs.Indira Gandhi,around 3000 Sikhs were killed and around 50000 were left homeless.What the former Prime Minister Mr.Rajiv Gandhi had to say about this anti-Sikh riots?He said this : "When a big tree falls, the earth trembles!".Doesn't this statement justify the genocide?Doesn't this statement indicate it was a state-sponsored riots and it was to avenge the death of Mrs.Indira Gandhi?Still that 'secular' former Prime Minister's wife is controlling the Congress party and brainy people like Dig Vijaya Singh are still supporting this party. But when it comes to Modi,everyone will become 'secular' and will make a controversy out of nothing.

All these over-reactions for Modi's normal comment only shows how much the secular camp is scared of Modi's entry to national politics.I doubt even if the BJP has such high hopes on Modi,but the congress has.Good,atleast on seeing this the BJP should understand the fact that Modi is the most popular leader of BJP and should work accordingly.There are some people who will never get satisfied with whatever explanations we give.Even though there is a concrete evidence in front of them,they will reject it outright and still stand by what they say.I would like to remind the age old rabbit story.There was an intelligent man,may be as intelligent as Digvijay SIngh,caught a rabbit,which lost a leg.He argued that rabbits has only three legs.Inspite of showing so many rabbits with 4 legs,the fellow was adamant and he showed the rabbit which he caught and still argued that rabbits will only have 3 legs.Instead of wasting all your energy trying to convince this intelligent man,isn't it better to accept that rabbits will only have 3 legs and move on?

Let me end this article with this disgusting comedy piece by Digvijay Singh.
"Digvijay wrote on Twitter: “Flip side of this. Amit Shah promises a Grand Temple at Ayodhya. Modi addresses Bihar BJP workers and asks them to teach Nitish a lesson.” “Next day Bomb Blasts at Mahabodhi Temple at Bodhgaya. Is there a connect? I don't know. ALLOW NIA TO COMPLETE INVESTIGATION PLEASE !(sic).”

There were bomb blasts in Bihar.For a moment everyone were shocked to see this in tv channels.But only a congressman like Digvijay Singh will immediately think like this and tweet.

The Uttarakhand Tragedy - An opportunity to help 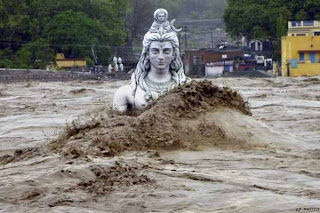 We all are aware of whats happening in Uttarakhand. This is the biggest natural disaster in India.The worst part is we are not even able to get the no. of deaths.Once again nature proved how powerful it is.
It will take some years for return of normal life there. This is a national tragedy and everyone of us should take part in it.

Not everyone can go to Uttarakhand and rescue people.But we can contribute as much as possible. The rescue operations itself is still going on.People are struggling for survival.After the rescue operations are over, the rehabilitation process will start.For all this,money is needed.We can contribute.Before the invent of internet and social media,we have to manually go to every shop,house,clinics,govt offices etc and collect money.10s,20s.50s and rarely we used to get 100s.Still we could contribute significantly during such situations.But now we have facebook,twitter,gtalk,whatsapp,orkut etc.Together we can make a significant contribution.

There are some jobless people who keeps sharing horrible photos and mention that for every share facebook will pay 1$.Guys don't be stupid,facebook will only make money out of us.It will never give a single penny to anyone.Instead of sharing such stupid pics,share this blog link(I wont get any money for sharing).Share the 'The New Indian Express' link which is given at the end of the post.That will do good to the victims.

If we contribute even Rs.100/head,say if 1000 of us donate,it itself amounts to Rs.1 lakh.People who are willing to contribute more can go ahead.Even a one rupee or ten rupees will be helpful to a great extent.

How to donate?
The best daily in India, The New Indian Express,has come up with an idea. We can contribute money through them.Please go through the news below :


The Call of Kedarnath

Funds are needed to carry out the formidable tasks ahead. In order to make it easy for people to contribute their mite, we have opened a new bank account named The New Indian Express Kedarnath Relief Fund. Staff members of the NIE Group are contributing a portion of their salaries and the company is adding a separate contribution of its own to provide Rs. 25 lakh as starting deposit for this Fund. We request our readers and associates to support the Fund.

*Cash contributions may be handed over to The New Indian Express office nearest to you and a receipt obtained on the spot.

*Online contributions can be sent directly to Indian Bank Current Account no. 6139752927, in the name of The New Indian Express Kedarnath Relief Fund, SWIFT-Code:IDIBINBBPAD/IFSC Code:IDIB000P001.The details of the contributions made may be sent to kedarnath@newindianexpress. com. You can also enter the details in the form here.

Contributions will be duly acknowledged in the columns of the paper. For any further details you may contact: 044-23457518 or mail us at kedarnath@newindianexpress.com.
We propose to forward the Fund to the appropriate authority to be used for a specific purpose to be identified soon.


Understand we are doing this for a noble cause. nterested people can contribute. We are doing for our own people.My deep condolences to the families of the deceased and displaced.May God give strength to the families of all these victims to overcome this tragedy and help for a speedy recovery.
Posted by Harish.M at 10:33 AM 2 comments: Links to this post