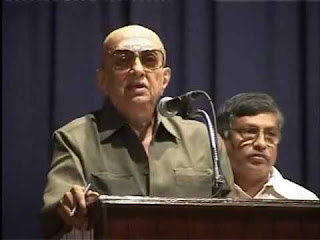 Still unable to believe that Cho is not alive and it's his death anniversary (Dec 7). I have been reading Thuglak and following 'journalist' Cho for almost 18 years. I am not exaggerating, I liked his sense of humor and started reading Thuglak only for his 'kelvi badhil' section.

Later, started understanding the sarcasm in his movie dialogues too. The way he would explain complicated topics, his boldness and humor sense all this created more interest in Thuglak and I have not missed a single edition of Thuglak. Slowly I started understanding the cartoons and political satire in Thuglak. Sathya sir's cartoons and his 'padhavi paduthum paadu' etc all made me a huge fan of Thuglak.

At one point of time, I felt Cho was one of the very few journalists who never feared to express his thoughts and I was convinced Cho was a very honest journalist, especially when he predicted defeat for ADMK though he admitted that he wanted admk to win. Not many had this honesty.

He has mocked almost all politicians. But he would never hit anyone below the belt. He has never missed an opportunity to take a dig at Kalaignar's politics and business, but not a single word was spoken against Kalaignar- the person. When he invited Kalaignar to attend his son's marriage, Kalaignar came with his family and there was a question from a reader, how he was able to maintain good relationship with almost all the politicians, he replied politely 'for this, the credit should go to those politicians, not to me'.

He had good relationship with many prime ministers starting from Morarji Desai to Modi. But never used them for his personal benefits.

Cho, never failed to respect people who differed with him. Thuglak strongly opposed the dravidian politics but the same Thuglak published the interview of Veeramani. Thuglak is perceived as a Hindutva mouthpiece, but for Thuglak anniversary, Jawahirulla, Peter Alphonse, D Raja, T K Rangarajan, Pazha.Karuppaiah were all invited as chief guests. Jawahirulla was not interrupted when he was talking against Modi. Later, with Jawahirulla on stage, Cho took a dig at him. Thirumavalavan was interviewed.

Dr.K V S Habib Mohammad, wrote a series of articles about Islam, under the heading, 'Islam oru paarvai' in Thuglak for several weeks, which showed Islam in positive light.

Cho had the maturity to restrict criticism to one's public life.

During emergency, he boldly opposed Indira Gandhi. He even wrote fictional plays and mocked Indira Gandhi (in)directly. Whenever the name Thuglak or Cho is referred to, some people immediately point out to his community and they even blame him as someone against the backward communities. Whereas in reality, Cho campaigned for Babu.Jagjivan Ram and wanted him to become the PM.

Ever since LTTE was formed, Cho was against the outfit. He was against Indira Gandhi's support to LTTE. He never changed his stance on LTTE and opposed them till his death. He was in favor of a unified Sri Lanka with Tamils getting equal rights.

When the entire nation was going crazy on Anna Hazare, Cho started mocking Anna and his team, right from day one. Some articles against Baba Ramdev too came in Thuglak.

Cho was always viewed as a spokesperson of ADMK/BJP. It doesn't mean Cho never criticized these parties. If you read Thuglak regularly, you can understand Cho never spared them too. But the criticism will be constructive, not abusive as some other weeklies does. That is the reason why he was seen as a spokesperson. Best example was, though Cho supported demonetization, the next week, Thuglak cover page had a cartoon about the prevailing cash crunch situation and mocking BJP. There is a difference between criticizing someone strongly and abusing them. Cho, always preferred the first way.

Cho helped DMK to ally with Mooppanar in 1996. In fact, Mooppanar came out of Congress and formed a party, based on Cho's advice. He also worked for ADMK-DMDK alliance in 2011. Before forming the alliance itself, Cho confidently said to Vijayakanth that, he would be the leader of opposition, if he joins the ADMK alliance. Cho never believed in dramatic changes overnight. He was practical. For him, in 1996, ADMK was a bigger evil than DMK. That is why he supported DMK, inspite of DMK's anti-brahmin politics. In 2011, DMK was a bigger evil and with DMK in power at both state and centre, many felt, a second term to DMK would turn TN itself a slave of one family. Cho felt the same. Then he brought in DMDK into ADMK alliance and rest is history.

His plays like 'Unmaye un vilai enna', 'Saathirangal sonnadhillai','enge brahmanan','Mohammad Bin Thuglak' are very popular even today. People write non sense in the name of quoting Ramayana or Mahabharatha. Cho wrote both Valmiki Ramayana(Valmiki Ramayanam) and Vyasar's Mahabharatha(Mahabharatham Pesukirathu) in Tamil, the authentic versions of Ramayana and Mahabharatha. I have listened to Cho's explanations to Bhagawad Gita, it gives an inexplicable pleasure. Only a gifted personality like Cho can do all that.

Personally, I have never imagined politics without Cho. Every day, I would be having some discussion about Cho. It may be on any topic, with a friend, with a colleague, in a facebook group, or even with a stranger, it happens. Unfortunately, at a crucial time, he is not alive. Had he been alive, ADMK would have come under the control of OPS. Sadly, Cho is not alive and we are missing his comments about various issues.

This is just a small article. A short tribute to my favorite journalist Mr.Cho Ramaswamy. If I get time, will try to write more about him.
Posted by Harish.M at 9:22 AM No comments: Links to this post