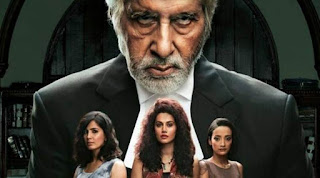 It may be late, still I feel, it is must to write a review for this movie. Pink is not an usual film or even I should say, its not an usual feminist film. Pink is reality. It just the reflection of our society. The movie starts off with one guy getting hurt and 3 girls, who looks tensed and nervous. On a fateful night, something happened between those influential guys and these 3 girls. What happened? Who is at fault? Who are these girls? What the guys do to these girls? How these girls handle them?. That's all Pink is about.

What distinguishes Pink from usual movies is, the way it slaps the society for its hypocrisy. Pre-interval scenes prepares the audience for an engaging court sequence in the second half. With a haunting background score and interesting screenplay, I bet you, not a single scene will divert your attention towards your electronic gadgets. It is the post interval scenes, that makes Pink, a special movie in the history of Indian cinema.

Amitabh Bachchan, who comes as a lawyer, completely dominates the second half of the movie. The dialogues by Ritesh Shah and the director Aniruddha Roy Chowdhury, are sharp enough to tear into the prevailing misogynistic attitude of the society. Based on the cross examination, Amitabh suggests he can write a safety manual for women and suggests some rules too, all sarcastically. These dialogues are not meant to just laugh out and move on, but should realize how arrogant the society is towards the women. For example, one of the rules, 'a girl should not drink with a boy. Drinking is a bad habit and it would make your character questionable, only if you are a girl. For boys, there is no such rule and for them, drinking is a bad habit only health issues'. Another rule for women's safety is, 'a girl should not laugh and crack jokes with a guy and should not touch him too. If she does so, it will be considered as 'hint' for sexual relationship'.

Think for a moment, aren't these dialogues true? Isn't there a difference in criticizing a drinking woman and a man?Does the society treats both of them same way? Definitely no. These are all pretty simple quotes. But the director walks that extra mile and brings in an important topic. A woman, because she is not a virgin, because she had sex with some people of her choice, should not be taken for granted. Even if she is a prostitute, none should touch her without her consent.

The movie neither endorses nor criticizes, the act of a woman having sex,with multiple people. It's just the choice of the individual. Others doesn't have any right to abuse such women. Simply, they live their life, as they wish. None compels you to follow their style. You are free to make your choice, but do not peep into others' privacy and call them by names.  The point which the director tries to establish is, if a woman(whoever it may be) says 'NO', it means 'No' and men are supposed to understand this. She may be anyone, may be your girl friend or your wife, you cannot touch her without her consent. When questioned about virginity, the judge asks if this statement can be recorded secretly, but she refuses the offer and boldly says, 'I haven't done anything wrong, let the world know'.

There are some nuances in the movie, for which, the director Aniruddha Roy Chowdhury, deserves a pat on his back. After the case becomes popular, people start speaking so many things, about these girls.While Amitabh and Tapsee are jogging, someone identifies her and says something like 'hey look, she is that girl'. She feels humiliated and covers her face and starts running, Amitabh uncovers it and asks her to run. This particular scene has conveyed a strong message to the society. When you are a victim, you have done no wrong, but being abused by the society, don't run away. Don't get into a shell. You have been victimized, its not your fault. It's the fault of someone else. Only the guilty should feel humiliated and not the victim. Our society is full of insane people and hypocrites. Their stand on issues will differ based on the person involved.Don't care about what it says. You haven't done anything wrong, be bold,face the situation, fight it out and emerge victorious. Hiding and running away is an act of cowardice.

The man whom Kirti Kulhari loved sincerely, breaks up with her and leaves her alone and moves on. Tapsee calls him a coward.When your girl is in trouble, stand by her. Don't run away. If you do so, you are a coward - message conveyed here.

All the meaningful dialogues written by the trio(Ritesh Shah,Aniruddha Roy Chowdhury
and Shoojit Sircar) gets life by Big B's majestic voice. Especially the feminist poems he recites during the end-card, receives thunderous response. What an actor Amitabh Bachchan is!!!!

I couldn't find any negatives in the movie. At the end, after observing the arguments, a woman police gets emotional and congratulates Amitabh Bachchan. The audience too, would like to congratulate the director similarly, for delivering this masterpiece.

Undoubtedly, Pink is a landmark film in the history of Indian cinema. If you haven't watched it yet, go for it.
Posted by Harish.M at 1:31 PM No comments: Links to this post