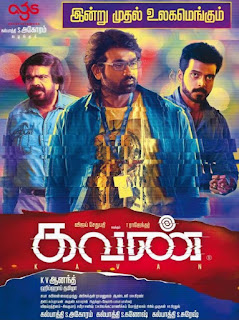 Kavan it starts well,but lack of an interesting script and poor supporting cast , lets the movie down, though it entertains a bit.. when you are making a movie about media terrorism, you should have a good actor, who can scare you with his mannerisms and looks, as a villain..You should have an equally good actor, as his rival..Some Akashdeep plays the villain here, leave alone scaring you, he doesn't even looks serious.. reminds me of some old comedians in good old Doordarshan serials.. and the man who plays his rival is none other than our legend T Rajendar.. I was thinking whether this is a spoof movie. A good actor, instead of T Rajendar, might worked out very well. Bose Venkat as a drunken politician fails to make any impact..

What saves the movie is Vijay Sethupathy's screen presence and acting.. He does well in scenes mocking Arnab Goswami and loud anchors..The interview scene with Bose Venkat was enjoyable, because of Vijay Sethupathy, especially VS's sarcastic expressions and smile..Madonna doesn't have much to do,she too can be seen with Vijay Sethupathy.. Vikranth as Abdul, makes his presence felt.. This is the second time I liked Vikranth's acting after Pandiyanadu..

On seeing names like SuBa and Kabilan Vairamuthu, I had an expectation that Kavan would be on par with Ko, if not better.. But the mediocre writing is the major drawback of Kavan..It's really disappointing to see these guys too adding some usual commercial stuffs about terrorism,minority, naxalites etc without a proper justification.. They have added some dialogues to satisfy the crowd that outrages on issues like methane extraction, nuclear power etc.. I am fully ok with writing communist dialogues in movies, agreed it sells,.. But when these dialogues fail to create any impact due to a poor script, you end up with disappointment..  For example, a movie like Joker, with a strong script and brilliant performances, made me enjoy the communist propaganda.. But definitely not Kavan.. Though the Kalpana story was handled well, Vikranth's Abdul character is pretty ordinary.. Kind of cliche. There is a dialogue about Rangaraj Pandey,Gopinath,Arnab Goswami that you have to attain their stature to bring some change in the society, though I partly agree popularity and stardom will help you in bringing a change, I dont think either of them has done anything good to the society :D

Hip Hop Thamizha's music is as bad as the villain's performance..The rap music for Bharathiyar poems was highly irritating. Probably one of the rare scenes in the movie which showed the reality, that how much irritating these 'reality shows' are. Someone should tell the music director Adhi, people call him 'modern Bharathi' to troll him, something like Sir Ravindra Jadeja. This guy took it too serious it seems.

Kavan, though better than the director's previous movie Anegan, is strictly average..
Posted by Harish.M at 10:17 AM No comments: Links to this post