Right now the hot topic in television channels and social media is the recently concluded assembly elections for 4 states and a UT - Tamil Nadu,Kerala,Assam,West Bengal and Puducherry. This blog post has nothing to do with other states and only deals with Tamil Nadu. The TV channels has published some data in the name of exit polls and are predicting a comfortable come-back for DMK barring C Voter. Before getting into the details we should understand what does an 'exit poll' mean? 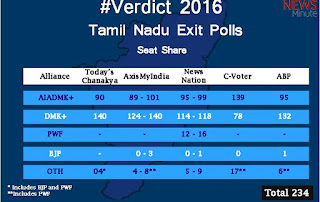 When you call what you publish is an exit poll, you should have proper evidences to back your claim. Does these channels have any such evidence? On what basis these channels have published this data? NDTV says ADMK will get 110 seats and DMK will get 109 seats. Does this even appear to be an exit poll? There is a common opinion that it is very difficult to predict the results this time and most of the constituencies will see a close fight between the major Dravidian parties. These channels have just utilized it to their advantage. By publishing such an exit poll data, they will get a very good viewership which would increase their TRP. This only reminds me a scene from an old movie. The hero will be sitting with disappointment, after trying his luck with lotteries. A small boy will collect the lottery tickets lying on road and our hero will say, 'hey these tickets are expired' and the boy will reply firmly 'I know sir, I am collecting these tickets after knowing that they are expired, others' laziness is what feeding me for a long time'. He is someone who makes money out of wastepaper.

This scene is from the movie 'Dhavani Kanavugal' vintage K Bhagyaraj film.

One of these surveys is based on caste. Its something like people belonging to a so and so community would have voted for a so and so party.One can't insult the Indian electoral system and electorate more than this.

I predicted 160-190 seats for AIADMK before elections. As per the electoral arithmetic, the AIADMK has a larger vote share compared to DMK. So if it's a direct fight between DMK and ADMK, without a wave(pro or anti), naturally the AIADMK should win. There is anti-incumbency factor. Yes the TN Chief minister is battling out the anti-incumbency,no doubt about it. But the anti-incumbency is not so powerful to bring a change of govt. Moreover, only if the anti-AIADMK votes goes to DMK, it will be a setback for ADMK. At present, the DMK is not in a position to cash-in on the situation. Had the DMK been strong enough, they would not have come down to such an extent asking Vijayakanth to join their alliance and Kalaignar made that infamous 'fruit' comment. Vijayakanth made the DMK to wait for long and dumped them. This has reduced the morale of DMK cadre. Other parties that would play a role in the outcome of these elections - 3rd front(PWF), PMK, Naam Thamizhar Katchi and BJP. The expectation was that these entities will take away the anti-ADMK votes from DMK. That seems to have not happened.

In AIADMK, Jayalalithaa changed the candidates frequently. Well, Jayalalithaa is known for this and she doesn't even spare her ministers. I used to make a funny comment that ADMK ministry is like a football team, that every substitute will get a chance to play. So I was not at all surprised by Jayalalithaa's decision to change the candidates. Whereas, the DMK's case is totally different.

The DMK party workers themselves were not happy with some candidates and they wanted them to be changed. Incidents of violence were reported too.Being in such a vulnerable position, how can DMK emerge as a super power all of a sudden? Even in 2006, there was not much of anti-incumbency against the ADMK govt, but DMK came to power. In 2006,the Congress party was considerably strong enough to help the DMK win many seats.This time too, the DMK and Congress are fighting the elections together, whereas the Congress is not the same as it was in 2006, as Vasan broke up with Congress and EVKS Elangovan has weakened Congress as much as possible.

I am not a reporter or I didn't do any fieldwork to get these details. These are purely based on what the newspapers and news websites(which I trust) publish. Based on these details and the candidates list, I arrived at the figures 160-190. The DMK, which was written off before 3 months, is suddenly making headlines. Well I am not sure what they did in these 3 months to emerge victorious. The reason for mentioning this is, I am just a random blogger and I am able to provide reasons for arriving at this figure. Infact, I can also write my understanding about each constituency and who may win. I may or may not get it right. My predictions have failed in 2006(predicted an ADMK govt),2009(I predicted a BJP govt at centre and more seats to ADMK in TN) and in 2014 ( predicted more seats to NDA in TN and less no. of seats to BJP at national level). But when all these channels got it wrong in 2011, my prediction came true in 2011. 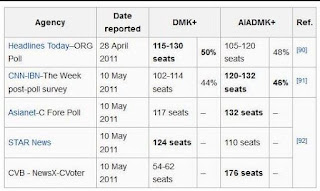 So this time, again, my prediction may or may not come true. But my point is, I predict based on some factors and observations, and I am no prodigy to get it right everytime.

But on what basis these channels publish the exit poll data? They were not able to give any convincing reason on how they arrived at these figures. Journalism at an all time low(well as usual).
I am damn sure,even if any of these so called exit poll results come true, its pure co-incidence and these channels are giving random numbers too.

Consider a situation, 'its an India South Africa match, 4 balls remaining, South Africa need 7 runs to win with A B Devilliers on strike. If someone asks you, will India win, and if you answer no, it doesn't mean you want India to lose, it only means South Africa is going to win and you said this based on ABD's track record. This example is for people who don't know the difference between prediction and wish.

Posted by Harish.M at 11:35 AM No comments: Links to this post

"--> 20% land on SME industrial parks will be reserved for SC/ST entrpreneurs.
--> Women to get 50% subsidy to buy mopeds of scooties
--> One soverign gold for women ahead of marriages" -
some diamonds from ADMK political manifesto..there is no announcement about improving educational system in TN.. these Dravidian parties has done their best to spoil the educational system and now we don't want national level entrance test.. we are saying it will only benefit Hindi speaking population..this is nothing but an impact of Uniform Syllabus education.. and I see people asking why don't you give education for free.. govt schools provide free education only..we the people don't want to experiment by getting an admission for our kids in govt schools as we feel 'money laundering' private schools are much better than govt schools.. if you have a prob with govt school, you should see how to correct it,going against pvt schools will not help you out.. if you want pvt schools to provide free education, who will provide salary to the staffs? without thinking anything if we keep shouting nonsense like this, we will only get a DMK or ADMK..
--->No FDI in retail

then make it compulsory for all the shopkeepers to give bill for the goods we purchase and publish a whitepaper on the tax collected from even a small bunk shop.. why do we have MRP? to sell Rs.32 soap to 32 itself? MRP only means you can sell upto the amount mentioned,not that you should sell it to the exact amount..
you are saying this is a pro-poor/middle-class budget.. how will it be a pro-middle class budget?by providing cell phones? I am not sure if everything mentioned in the manifesto will be implemented, but if its implemented , there can only be two outcomes, either tax the salaried class or make TN bankrupt by the end of 5 years(assuming ADMK govt comes again)..
I am not sure if there is anything to appreciate in the election manifesto of ADMK..may be we can feel happy that there is no policy difference in handling the properties Hindu and minority religious bodies.. having said that, I see people who openly endorsed free color tvs opposing ADMK's freebies.. dear DMK boys, you started this and ADMK is taking it to next level..if you say this manifesto is bad,yours is bad too.. you people have gifted Katchatheevu and now promising to bring it back.. introduced liquor in TN and now speaking about prohibition..Even DMK promised 2 cents of land in 2006 when statistics proved that so much of land was not available at all :D and it seems only because of that DMK people involved in land grabbing activities.

DMK gave away free Televisions and made people buy set top box. Needless to say it was a monopoly during DMK rule and only SCV benefited because of it. If you have followed current affairs, you may be knowing how dangerous are the Maran brothers. So saying DMK is better than ADMK is nothing more than a joke.
Personally I am not a fan of this freebies politics, but this election manifesto will play a major role in the upcoming elections.. even in 2006 I dont think people elected DMK for color tv, it was the alliance that brought them back to power..even this time a divided opposition puts ADMK in driver's seat.. how this manifesto will increase the fortunes of ADMK? I have been hearing that in some constituencies the field work of ADMK party workers is not satisfactory.. with an election manifesto like this, the field work would gain momentum and that would increase the chances of an ADMK win..

Posted by Harish.M at 12:25 PM No comments: Links to this post