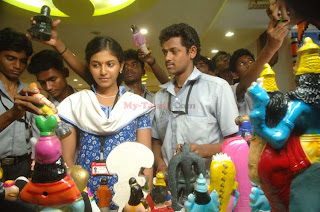 
Hello everyone.. Am back with a movie review again.Actually I didn't want to post movie reviews in this blog.But this movie has made me to post a review again.So what made me to post reviews again?It is nothing but the realistic portrayal of the lives of the sales people.I guess this movie is mainly targeted at Saravana Stores.Sneha has also given a special appearance in this movie. Oh no, its quite a co-incidence that I wrote Saravana Stores name and Sneha’s name in the consecutive lines,nothing intentional :D. Lets discuss about the movie.


The movie starts of with the hero-heroine doing some mischives.Later on it moves to flashback. Jothilingam(Mahesh) comes from a poor family and due to circumstances he works as a sales person in Senthil Murugan stores,a famous textile shop in Ranganathan street,T Nagar,with his friend Pandi,Kana Kanum Kalangal fame Pandi. There he meets Kani(Anjali) and falls in love with her. The way both fall into love has been portrayed quite naturally by the director. The movie is all about how these kind of sales people,are treated in the shop by the concerned authorities. Director A.Venkatesh and my favorite writer Pazha.Karuppayya have acted as villains. Venkatesh,who is called as Karunkaali by the workers,has simply rocked in that role as a ruthless supervisor. Pazha.Karuppayya,the Annachi, resembles a popular shop in T Nagar, especially when he comments about Sneha’s saree, when the ad film was being shot :D.


These villains torture everyone working there and the sales people are treated like slaves. One girl even commits suicide for loving a guy in that shop, due to Karunkaali. That much cruel person he is. So how he troubles the lead pair and how they escape from this shop and what kind of difficulties they face and how they overcome these difficulties is the story precisely.What really keeps us tied with this movie is that the realistic portrayal and excellent dialogues(Kudos to Jayamohan). The best part of the movie is that it shows different kinds of people, suffering in many ways, but still prefers to work and doesn’t beg. For example, one person keeps on asking everyone to give him a job. None responds him, but an old lady gives him some money to buy food. This person refuses to get that money. Instead he gets some water and cleans ugly the public toilet and does some minimal decoration to it. After that he sits outside the toilet and collects money from people for using it. Then he is shown as living a better life.


Another excellent scene that got standing ovation from audience is that, a dwarf man gets disappointed when his new born child is also dwarf like him whereas his wife feels happy for it. When questioned she says, “I have been sweeping in this street along this person only,if the child is not dwarf people will question the legitimacy of the fatherhood of this child. But now none will question”. Like there are lot of good scenes in the movie.


Coming to Mahesh,the hero, a new face , he has done an excellent job. His acting doesn’t look like a debutant at all. Great,keep it up :-). And Anjali too has played her girl-next-door kind of role perfectly. Other artistes like Sophiya,Pandi, an old man selling remote covers in platform and even Sneha :D and everyone else has been given equal importance and they have done justice to their roles.


There is space for comedy too. The scene in which Lingu narrates his love experience with Ashwini is a hilarious one.


Music is good. Aval appadi ondrum azhagillai song is too pleasant to hear and it was also picturized nicely. Un perai Ketkumpothe song is an excellent melody and Shreya Ghosal and Naresh Iyyer’s voices makes it too sweet.BGM is also nice. Vijay Antony and G V Prakash has handled the music,both have done a neat job,though songs composed by Vijay Antony is better than GV. Na.Muthu Kumar again proves that he is the common man’s lyricist. The naïve and innocent lyrics like aval appadi ondrum color illai aanal athu oru kurai illa,aval uduthum udayum pidikkavillai irunthum gavanikka marukka villai, shows what a clean thinker he is.Again in the song Kannil Theriyum Kaalam Kayyil varatha,he stresses on mechanical life of people and the dreams and desires of a common man. One can even say that Muthukumar is the best lyricist in current generation.


Camera man Richard M Nathan deserves a special mention here. We all might have gone to T Nagar. We all know about the kind of rush in Ranganathan Street. It is not easy to even walk. But this man has shot the scenes, that too with hidden cameras. This is no mean task to achieve and his camera work is outstanding in this movie.


All said and done,the best thing in this movie is, it has shown the people with lot of negatives(I mean difficulties, due to nature and circumstances) in a positive light. None of the characters loses its confidence and till the end they fight for a decent living. At the same time I was really moved to tears when I realized how difficult is the life of people working in Saravana Stores or Sankarapandiyan Stores. The movie says all the characters and dialogues are fictitious. But it doesn’t look like a fiction. It is a movie about people whom we come across daily but hardly get noticed.


Those who read this review,please ask all ur friends and relatives to watch this movie. In theater today there were hardly 100 people. Such movies should become a huge hit at Box Office. Then only more such practical and honest movies will come in Tamil. Otherwise, if only mindless masala movies are becoming hit means, A.Venkatesh, who has done a superb job as a villain in this movie, will keep on torturing us by releasing 4 Arun Vijay and Sarath Kumar movies every 6 months.(Not only him, just for ex I told his name). Take my words, this is a must watch movie :-)