MGR - The Leader of Masses

I have been thinking to write something about this great personality and finally I found time to do so. M.G.Ramachandran's(popularly known as MGR) birthday falls on January 17th and so let this post be a token of respect to him.
Let me start about MGR's acting.In my opinion MGR is not a method actor like Sivaji, but still a good actor and entertainer.If you want to know what I actually mean by 'method' acting means,you have to watch movies like Deiva Magan,RajapartRangadhurai etc. Sivaji's acting will be mindblowing in these movies.But when it comes to MGR,he has not done such movies.He started off with small roles in cinema.He got his first break in the movie MandhiriKumari.After that slowly his career graph as an actor progressed well and he became an action hero.
The moment we talk about MGR,the first thing that may come to our mind will be his movies' songs. MGR-TMS-MSV-Kannadasan/Vaali is a golden combo.MGR's movie shooting will commence only after song recording is over(this info I got from elderly people :)).Its not so easy to work with MGR.He is such an intelligent artiste.He had a thorough knowledge in almost every aspect of film-making.He will listen to the tune and lyrics.Only after he gives his nod to go ahead with recording,the song recording will be done.It is said that while working for the movie Ulagam Sutrum Vaaliban(directed by MGR himself),M.S.Viswanathan told MGR that he can't work with him any more and he urged MGR to go for someother music director.Reason - MGR was not satisfied with the tunes given by MSV.But MGR had faith in MSV and he asked for better tunes.And finally the movie released and its one of the all-time top-grossers in the history of Tamil Cinema.MGR called MSV and pesonally thanked him for giving good music and told only to get the best out of him,he made him toil so much.
When he saw the preview show of the movie "Alaigal Oivathillai",directed by Barathiraja,he called the director personally and asked him that "I think you have shot an alternative climax too".Barathiraja got astonished,because none knows that he had shot another climax.He got stunned on MGR's knowledge about cinema. 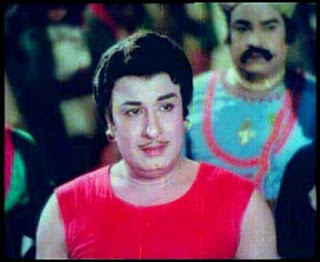 He is a macho-man in real life too.He was well-versed in martial arts(sword fight,silambam etc).While shooting the song "Kashmir beautiful Kashmir",some rogues were passing silly comments on the female dancers and were teasing them.MGR performed a live stunt-show.He beat them severely and handed over to police.He has directed 3 movies and all the 3 were mega hits. Nadodi Mannan,Adimaippen and Ulagam Sutrum Vaaliban.
Many think that using his cinematic image MGR became CM easily.Of-course,his fame in cinema helped him very much,no doubt at all,but he didn't become the CM of Tamil Nadu just like that.He has gone through lot of troubles and difficult situations before becoming CM. 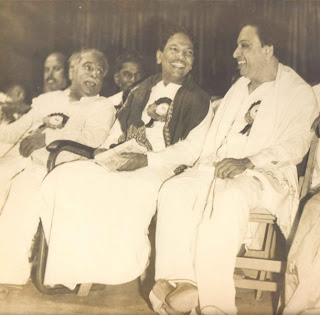 He joined the DMK party in the beginning.He worked for the party very much.He was a close friend to Mr.Karunanithi(Tamil Nadu CM).But it was after Anna's death the political scenario changed in TN.MGR was sidelined by Kalaignar.He didn't get the much needed importance.After his expulsion from DMK,MGR started his own political party and named it as Anna Dravida Munnetra Kazhagam(ADMK).He faced several obstacles before coming to power.
The DMK threw mic at him.MGR with frustration,threw an open challenge that he will come to the assembly only after he becomes Chief Minister.He became the CM on 30th July,1977 and he remained in the office as CM till his death.In 1979,he supported the Janata Party at the center,which is considered one of his significant political moves.He first supported Charan Singh,but later on he was ready to support 'Babu' Jagajivan Ram. When he extended his support to Mr.Jagajivan Ram,the then president of India,Mr.Neelam Sanjeeva Reddy dissolved the house for obvious reasons.
In 1980,MGR's democratically elected government was dissolved by the congress party,which gave no good reason for it.The congress was in alliance with DMK in 1980.And since the Janata Party couldn't give a stable government at center,people lost confidence on Janata Party and they voted for congress.Because of this the DMK-Congress alliance almost swept the parliament elections held in 1980.So the DMK was of the opinion that if the elections are announced in Tamil Nadu,they can win comfortably.Many predicted a land slide victory for the DMK-Congress alliance.The congress too wanted to take revenge on MGR for supporting Janata Party,so they dismissed the government and fresh elections were conducted.
People proved the predictions wrong.The MGR led ADMK won convincingly while the opposition ended up with egg on its face.In 1984,MGR didn't even visit his constituency for election campaigns.He was getting treatment in America.Some miscreants even spread rumors that MGR was not alive.Again they ended up with egg on their face,as MGR without even visiting his constituency won with a great margin.
In Tamil Nadu till today there is no naxalite problem.When MGR was in power the naxal problem surfaced in TN too.MGR gave a free-hand to police to eliminate naxalites.His bold and tough decision completely eradicated naxalism from TN.Not many politicians in India,has this much guts to fight terrorism,goondaism etc.
MGR brought the free meals scheme for children studying in govt. schools.Now it is one among the World Bank's model schemes.In MGR's rule,there was no caste based politics.He didn't abuse the media by calling it as 'paarpana oodagam'(Brahmin Media).Many use to say that you can light up your stove and then go to MGR's house to get rice(which means you will get rice from his house definitely).He gave almost his entire Ramapuram garden to blind school.
There is a complaint that he used cinema for his political advantage.Yes,he used it.His movies used to carry lot of political dialogs and most of his songs will have politically motivated lyrics too.People who complain on this should understand the very fact that every reputed hero at one point of time will use the mass media in his favor.But not many could taste success in this aspect.If MGR was able to do that successfully means,its purely his intelligence and the dialogs will be very much within the screenplay.If you watch the movie 'Nadodi Mannan',you can understand this.
MGR's roles is that of a communist in that movie(Nadodi Mannan) and accidentally he will be made the king. At that time the ministers will tell him,
"வீராங்கா நாங்கள் உன்னை நம்பி தான் அதிகாரங்களை உன்னிடம் ஒப்படைக்கிறோம்"
for which MGR will reply,
அமைச்சர்களே என்னை நம்பாமல் கெட்டவர்கள் நிறைய பேர் உண்டு நம்பி கெட்டவர் இன்று வரை இல்லை.
"சகோதரி இன்னும் என்னை நம்புகிறாயா"
for which she will reply,
"நான் மட்டும் இல்லை அண்ணா இந்த நாடே உங்களை நம்பி தான் இருக்கிறது".
This movie was re-released in the year 2006 and see the crowd gathered at Albert theater. 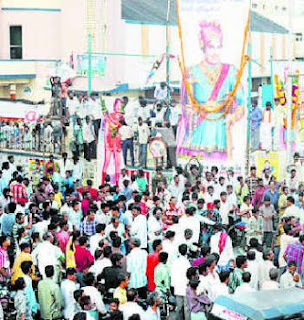 I used to watch MGR films rather than sivaji films because in his films the songs were good, healthy dialogues almost it ll b about our country and our state tamil nadu...

believe it or not, in our village still people will say MGR is one of the greatest leaders and he s living in their minds forever...

amazin article machi!! i really came to knw a lot abt MGR frm this!! but u can still post some more gud measures he has taken n xecuted! even u can list all!! naxalist and free of food at govt skools is fine!! u can mention some more if he has done! nyhws MGR s evagreen!

@Anand - yes its very true.. Still people in village has a great respect towards MGR.. MGR is immortal :-)

@dude- actually I thought of writing more,but you see the space :D this one post occupied this entire page... Thats why stopped with this.. I will come up with an exclusive political post about MGR soon :-)

I hope the film ADIMAIPPENN (produced by Emgeeyaar (MGR) pictures, is directed by K. SANKAR
(Senior). Please verify it.

I am proud to say that the TWO LEGENDS," Makkal Thilakam M G R" and" Mellisai mannar M.S.Viswanathan
belong to VADAVANNUR & ELAPPULLY,respectively, which is very near to my place CHITTUR. (Palakkad Dist)

Neelakantan Ji - Good to see your comments.. And its also great to hear that u r from a place which is very close to that of the legends..

And regd Adimaippen,I think it was directed by MGR only.. Will check out with the movie and confirm it.. If its K.Sankar,I will edit this post and thanks for ur valid suggestions :-)

@Abhishek - Thanks for ur comment machi :-) I posted those dialogs in Tamil just for the sake of nativity.. could have given translation in English.. Anyway thanks for going thru the entire post :-)

naxal info was great..I do agree he is great leader.

@Varun - Ya he is definitely a great leader.. Thanks for commenting here :-)

HI...MY NAME IS MOHAN
IT WAS GOOD EXPERIENCE TO READ THIS LIFE STORY OF LEGEND MGR... ACTUALLY I DONT HAVE SINGLE MINUTE TO WORK ON UNWANTED. BUT JUST LUCKILY GOT YOUR SITE. I JUST STARTED READING CASUALY, BUT IT'S VERY VERY INTERSTING AND I STOPED TO WORK MY OFFICE FILES, HE IS NOT HUMAN. TAMILNADU PEOPLES SAID HE IS THE ONLY GOD, WE DIDNT RETRIVE LIKE MGR TILL NOW FOR OUR TAMILNADU... I REMEMBER THE LINES, THAT IS "IRUNDHALUM MARAINDHALUM PAER SOLLA VENDUM, IVAR POLA YAAR ENDRU OOR SOLLA VENDUM". THAT IS MGR. PLEASE TRY TO GIVE MORE DETAILS ABOUT MGR ALL THE BEST...

Mohan Ram - Thanks a lot sir, for such an encouraging comment.. Its a pleasure to write about the great 'PuratchiThalaivar'.. Thanks for the encouragement,will update about Thalaivar soon with more information.

Superb, I love our Thalaivar.