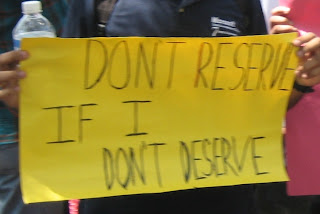 Hello friends.. Am back with a controversial topic.. I think this is the first time am blogging about such a controversial topic.. Actually I thought of giving a miss to this topic.. But things going around has made me to write an article about the reservation system in India.. I am not going to change anything by writing blogs about reservation,but to just to vent out my anger am doing this. Ofcourse I might get into some embarrassing situation with this blog, but still just wanted to go for it.. So what’s my take on reservations? The pic which I have included clearly gives the answer for this question.

Yes.Am not against reservations.But am against giving reservations to those who doesn’t deserve it. Why this concept of reservation was started?Its purely because of the fact that,once, the rights of some communities were suppressed by some of the ‘so called’ upper caste people. Only for the upliftment of these people, Dr.B.R.Ambedkar framed the constitution with reservations for the backward communities. The main goal behind this reservation is that every individual should get equal opportunities. If the reservations has been implemented properly, by this time most of the people from tribal areas,backward communities etc should be leading a better life(if not a comfortable life). And the % of reservation should have gone down gradually. But that didn’t happen and instead the % of reservation grew up gradually and it seems it will continue to grow.


All that am saying is the creamy layer should be chopped. What is creamy layer? This creamy layer denotes the people who has enjoyed the benefits of reservation and who r in a position to look after themselves(i.e., they,no more needs the govt to take care of themselves). How this reservation spoils the chances of the deserving people? Let us consider a family,which belongs to OBC category. The husband is an Engineer,the wife is a doctor. Now that their son wants to join medicine,but he has not scored enough marks to get it in general category. So his community comes into picture and he can get a seat in OBC quota. He has enough marks for that. Is this not spoiling the chances of others? If he has not got enough marks to get medicine means,he should have chosen any other field for which he is eligible or he should have bought it,I mean got it by paying money.


Don’t think am too harsh on him.The reason y am saying like this is,he is neither socially nor economically backward. But he couldn’t score enough marks purely because of his incompetency.Giving quotas to such people will degrade our standard(education,jobs etc).He is indirectly spoiling the chances of another OBC student and also reducing the seat in general category. I have seen people missing out seats in reputed Indian univs,by 1 mark,1/2 mark etc in general category. So according to me,this creamy layer should be chopped.


Then,nowadays there is another issue making news everywhere. That is increasing quotas to backward communities in all religions. The AP govt,under late,Mr.YSR, announced 4% reservation for Muslims.But the AP High Court,rejected this and said there is no provision in law to provide reservations based on religion. Once again the AP govt announced quotas to some communities belonging to Islam,stating that they are socio-economically backward.Once again the Supreme Court rejected it.But now it(Supreme Court) has given a go ahead for this law temporarily and has referred this case to a constitutional bench.So the final verdict is yet to come,but until it comes this can be implemented.


Another similar announcement in West Bengal.The govt,under Mr.Buddhadeb Bhattacharya,has again announced quotas for Muslims,which again if challenged in court,will be rejected. Because,till now there is no provision in our constitution to provide reservation based on religions.And not to forget,our man, Dr.Kalaignar,our honorable CM,is also facing one such issue. The thing is some days back there was a dharna by Dalits of Christianity in TN. They want the reservation to be given to Dalits belonging to all religions. So our CM,has written letter(as usual) to our PM,regarding this.But what’s the problem in this?


The thing is,again Mr.Ambedkar, allocated this reservation purely based on socio-economic background.It is only in Hindu religion, the varnasrama concept of Brahmana,Kshatriya,Vaisya and Suthra existed.So only in Hinduism,a particular group of people where suppressed of any rights.But there is no such Varnasram concept in Islam or Christianity. So, a person,who will be grouped under SC/ST,when he is a Hindu,will be grouped under OBC only,if he gets converted to anyother religion.FYKI, reservation already exists for other religions too,but under OBC.

I want to make a question here. The Christian Missionaries converts illiterates,Dalits etc from Hinduism,only with the assurance that they won’t be treated badly and there is no untouchablity in Christianity.They also provide assurance that these people will be provided with a good job,education etc. So it obviously means that the status of these people gets elevated once they get converted to other religions.So again why u people are protesting for reservations?Most of the people know only Mr.Periyar(Mr.E.V.Ramasamy,honorably called as Periyar) as an atheist.Yes he was.But I have come across some of his principles in a book.In that he has clearly mentioned that the untouchablity should be abolished in Hinduism.Otherwise people will use this as an advantage and convert these ‘so called untouchables’ to some other religion,which is a grave threat to our nation. I strongly support this.Both untouchablity and forceful conversion is a shame and crime.


But one thing,if someone after reading Bible or Quran or Bhagavad Gita,impressed by its principles,wants to follow that particular religion means,there is nothing wrong in it.Its the individual’s own right.


Let’s come back to reservation. Now there is a comedian(hey he is really a comedian only) who is praising our CM for his personal benefits,says that he is the representative of Brahmins and he says that even Brahmins should get reservation.How did he suddenly become savior of Brahmins?God knows the reason.A reservation for Brahmin community will again end up in misery.Again the creamy layer will enjoy all the benefits. So what Mr.S.Ve.Sekhar says is utter nonsense.I don’t support this.


So the protest is going on. A commission set up by the govt., headed by former chief justice of India,Mr.Ranganath Mishra has recommended 10 per cent reservation for Muslims and five per cent for other minorities in government jobs and favoured Scheduled Caste status for Dalits in all religions.I don’t know whether this is also possible according to law. Who knows our politicians,who wants to project themselves as the saviors of Muslims/Christians might alter the law itself and might make this possible.


But in my honest opinion,the political parties are playing this reservation issue to woo Muslims and Christians. Purely votebank politics.


But as a responsible citizen of India,I am not ok with this.Now people might think that am writing all these stuff since I was a victim of reservation.If u think so u r wrong.I have never been a victim of reservation and I believe I will never be.Yes u r right,I am grouped under OC.But am just expressing my thoughts on quotas. I myself have seen a person who got converted to Christianity due to unbearable torture in the name of untouchablity and he has given in writing that his son/daughter doesn’t need any reservation, as he is a doctor and is well enough to take care of his child. Hats off Doctor.


If the quotas r really meant for the upliftment of the backward people,the creamy layer should be chopped.Again a new census should be taken and the report of how many % of people r still badly in need of the reservation must tabled in Supreme Court. Based on this new report,the quotas should be given. I believe only because some people were not given equal opportunities they couldn’t succeed in their life. If they get opportunity,they will win. And caste is no bar for achieving. I believe god created everyone with equal talent and knowledge.


So acc to me this reservation should reach the deserving people and people should come forward themselves to renounce the quotas,once they get a better life.And the reservation should b given based on economic background(and again enough care should be taken to c that people doesn’t project themselves as poors for the sake of quotas).


Note: In some places I have referred to some people as Dalits,’so called untouchables,so called upper caste,so called suppressed community’ etc.I don’t have anything to do with these names. Since in society they are called that way,I’m forced to use these words and I have no other option to highlight them.And if this article hurts anyone or if anyone feels that am against u,kindly ignore it,thinking that this is a worthless article.My intention is not to hurt anyone, just expressing my opinion.

Machi super post da u have metioned the disadvatages of reservation very clearly ..and that god gives equl knowledge to every one great philosophy da ... And I too feel that there is nothin wrong in givin reservation but it must be given to the people who deserve it so creamy layer must be chopped . but namma evlo tha kaatu kathu kathinalum evanum keakka porathu illa so neenga mention panninathuellam avan avana unara varaikkum nothin can be done :(:(:(

machi it was very good about the reservation now a days in our india many of the politician are playing game with religion or something it should be in control when the india government break the law reservation based on the religion in all.they should change the reservation based on the family income i like much about.......this ...and i want to say we we are disscussing abt a politics in college days i feel happy diss with u ....now also wen i read ur comment i feel a same because....if i am in ur close what u able to speak that all thing u written in this....

@Raghav- Ya Self realization is what needed.. Politicians will never change,only we have to change..

@mani- Thanks for such a nice comment..yes I do remember our arguments in college.. Golden days man.. Yeah what I have written is nothing but the reflection of thoughts of most of the students like u,Raghav,me etc..

hey i am student & presently working on researvation quta .......i loved your article... its so crustal & clear. would love to discuss further ...... :) thank u