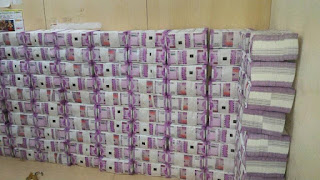 It has been almost 2 weeks since the Prime Minister of India made an announcement that Rs 500 and Rs 1000 notes will be illegal tender. A lot has been spoken and written about the announcement since Nov 8th(the day on which he made the announcement). To be fair, this is the only topic of discussion among atleast 90% of Indians. This has pushed back all other news items like the issue of a missing student at Delhi JNU stone pelting in Kashmir by people demanding 'freedom', protests against the suicide of an ex-army veteran etc. What the people are saying actually? To what extent this has impacted the life of common man? Does this have any positive effects? With whatever I heard from people and read in media(kind of reliable), I am writing this post. I would also like to add this disclaimer before writing further "I don't have much knowledge in economics".

There are two types of reactions coming out for this move. The reactions started pouring in minutes after the Prime Minister made this announcement. Though a lot has been written and spoken about this, the reactions can be classified into just 2 categories - 1) This is a great move to fight corruption, terrorism and fake currency. 2)This is a foolish move and not a war against the corrupt but against the common man.

This is a huge announcement, no doubt about it. To maintain something secret in a country like India itself is an achievement. Modi has done well to maintain the secrecy such that even his own ministers were not aware of it. I don't take Kejriwal seriously, so don't refer to his allegations and argue with me. This news - Rs 91 lakh worth old notes found in Maharashtra BJP minister’s vehicle  only proves that the information did not leak. As a common man, I can applaud the intention of Mr.Modi. The argument that Modi did this expecting some monetary benefits or political gains doesn't hold water. He has actually risked his political career. We all know, majority of the bureaucrats are corrupt and hand in glove with the corrupt politicians. Traders has been traditional vote bank of Modi, especially diamond merchants and jewelers. This move is going to affect them severely. Because they are not standing in queue to exchange their Rs.500 and 1000 notes, don't think they are happy.

The rich(especially those who lend money for daily interest) are trying their best to convert their black money to white money. They are following different strategies like asking their laborers to deposit money into their account, get their money exchanged through poor people etc. We have to wait until December 30 to see what action will be taken against these people. The income tax department started sending notice to those depositing huge cash - news . Stone pelting and the so called freedom struggle has come to a halt in Kashmir. Crime rate has come down too. The reason is, it is money that decides many things. Due to the note ban and limitations in drawing currency, it has become difficult to hire people to carry out unlawful activities. To this extent its all good.

But is the announcement foolproof? While we are cheering about the corrupt getting punished(till now we only have news about money being seized or thrown away and no other action), we fail to see the difficulty of people who are dependent on 'cash'. Not everyone who are complaining about the note ban are anti nationals or black money hoarders. There is an India which is yet to see the digital world, so whenever the question of cash deficiency is raised, the immediate response like 'pay using cards, paytm, use your card' etc would sound arrogant. Let me tell a small example. I thought of going to salon today, to shave off my beard, but I have only limited number of lower denomination notes(and no higher denomination notes :D ), as I have no hopes of drawing money from ATM in the next 2 days too, I dropped the plan of going to salon. I bought a blade and shaved off my beard myself. Had I gone to salon, he would have charged me Rs.100 atleast. So, I have saved Rs.100. But the barber lost his business due to non availability of cash. This is what happening today.

Small traders are severely affected. Small hotels and messes, hawkers, road side shops etc are not getting customers as much as they used to regularly. People are reluctant to spend 'cash' and expecting roadside hawkers to have card swiping machine is too much. The problem is not with the announcement. I dont agree with the point that Modi should have given more time. But the problem is the govt was not prepared enough to handle the after effects of demonetization. If people don't spend cash, how would the circulation happen? There are Modi fans and haters and their arguments only seems to be win the arguments and satisfy their ego. The haters simply abuse the Prime Minister with comments that neither has decency nor has common sense and the fans(or the Modi bhakts) are projecting as if the entire nation is happy and none is suffering. Something similar to Sun tv showing as if Tamil Nadu is burning and Jaya Tv showing as if the state is like heaven and people are happy like never before.

If you think, the poor and lower middle class is completely against Modi for making this announcement, then I would say you haven't understood the reality. While taking a survey, only when we keep aside our pre-meditated opinion and political affinity, we will be able to get the clear picture. Ofcourse I didn't conduct any surveys based on any so called 'scientific methods'. But I have tried my best to understand what people belonging to different professions think about this demonetization. People who are facing emergency situations are literally abusing the Prime Minister. They are not ready to listen any explanation. But there are people, who depend on their day to day business for food, supporting Modi. They openly welcomed the move. This is what I heard from many - 'yes I am struggling, I am not able to meet my necessities. But without pain there is no gain. I am ready to face this. For the first time a Prime Minister is openly calling for a war against corruption, we are ready to support him, our only expectation is the corruption should come down and the nation should prosper'. And on the other hand, people who are impatient, also not rejecting this move completely though they are angry with the way this has been implemented. 'Why should I suffer sir? I am paying my tax properly. I am not allowed to use my own money. They have made an honest citizen like me to suffer but people like Janardhana Reddy are not affected at all. Let me see sir, how long this circus goes on.' and when I asked them, 'what if this move has a positive effect in due course of time', some replies were sarcastic smile and some were 'if I am proved wrong,I will be happy'.

Hope the trust of these innocent hard working people is restored and the Prime Minister stands by his word to punish the corrupt and eradicates the black market.

I thought about this. Are our people so kind to support a Prime Minister who has been painted a demon by the media for more than a decade? I discussed this with some people who has deep knowledge in politics. I was able to figure out a reason - people are frustrated with the system. They are not ready to believe the gimmicks of a desperate opposition. Their expectation is, even if this goes on for a while, at one point of time, it should produce the desired outcome. Real estate and educational institutions are the main reason for black market to flourish. That has made owning a home a distant dream for the poor and middle class.

Ever since Modi made this announcement, not a single politician has made a sensible comment on this. A desperate Arvind Kejriwal and Mamata Banerjee are visible in media more than Rahul Gandhi, a main leader of the principal opposition party - Congress. Kejriwal and Mamata wants a rollback of this decision. Will a rollback not result in more confusions? If someone is asking for a rollback desperately, I should only believe that they have loads of black money with them and are finding it difficult to get it exchanged. No wonder, Kejriwal is spreading lies daily.

Not a single leader came up with statistics about how many ATMs are installed throughout the nation? How much cash transactions were made in these ATMs every day? Now how many ATMs are functioning properly? How much cash is being loaded into ATMs? How much cash is being withdrawn? Is the cash to population ratio being met? What are the steps taken by the govt to restore normalcy? The govt announced that you can get cash(upto Rs.2000) from petrol bunks by swiping your cards, but there are lot of challenges in that. The petrol bunks are not ready to give the cash for people who dont fill petrol in their bunks. Some petrol bunks claim they have tie up with private banks so they cannot use SBI swiping machines.  "Contacted, some fuel station proprietors argued that they have tie-ups only with private banks and so do not use a card swiping machine of SBI or other Nationalised banks. ‘’With limited currency available in our reserve, it is not feasible for us to tender cash to people who do not even purchase fuel,’’ a petrol pump owner said asking not to be quoted." - source - The New Indian Express . To what extent the micro ATMs and mobile ATMs has addressed the needs of people?

Instead of making a constructive criticism about this announcement, the opposition is behaving as if Modi has seized their entire wealth. Personally I feel, this is a welcome move , but Modi has overestimated his resources. With bank employees working hard all day and night to meet the requirements, the problem lies somewhere else. You cannot tax the bank employees too much. They are all human beings too. So, my point is, the govt should have been prepared enough with micro ATMs, mobile ATMs etc well in advance and then only made this announcement. Now that people are living with whatever inconvenience they have. If the restrictions on withdrawal continue even after 29th November, it will add up to the chaos and be difficult to manage, because on 30th is the Salary Day. Pensioners will suffer if the situation is not addressed at the earliest.

I am not asking for a rollback, I am not against making an overnight announcement, I am even ready to swallow the bitter pill, but it is the duty of the govt to ensure that the 'bitter pill' doesnt turn 'bitter meal'. If the demonetization produces the desired positive outcome, our standard of living will improve. If not, it would take lot of time to restore normalcy.
Posted by Harish.M at 5:02 AM