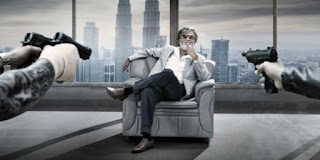 Probably for the first time in the last 2 decades, Rajni has teamed up with an young director, which increased the expectations from the Kabali team. Except Rajni,everyone else failed.The movie has positives, I am not denying it.It is clearly a Ranjith film and Rajni has not influenced him at all.The director was given full freedom(which not many who directed the superstar got).Yet the director has tried to balance between the Superstar's image and his own agenda.
Rajni is an excellent actor, he hasn't done many challenging roles in recent past.But in Kabali, he has done very well.

I would not say this is a challenging role or some kind of method acting,but without too many mass scenes,Rajni was able to create an impact. One need not describe his walks or mannerisms, even a hater would clap for that while watching him on screen.His smile,the way he cries on hearing about Radhika Apte,the Pondicherry sequence etc are enough proofs to show what a quality actor Rajnikanth is. This is a different Rajni and completely satisfied with his brilliant performance.

Santhosh Narayanan songs failed to gel with the movie. The re-recording was a big let down,not sure who is responsible for this - Santosh Narayanan or Ranjith?

From the beginning,there are only dialogues and no surprise elements. Its a very predictable screenplay and a poor script.Yes, some dialogues like the one about birds, one shown in teaser,one about the coat-suit etc, recieved thunderous response.One can rely on dialogues, but should be backed by good scenes. All the 'Free life' scenes were artificial and it only tests your patience, at times.One couldn't avoid getting a feel of watching some documentary.

Rajni's intro scene was good,its a good idea to show the superstar going in search of his wife and taking on the enemies.In this journey,Ranjith should have given some powerful scenes to Rajni,whereas the director didn't do that. Rajni was also another character throughout the journey and that journey moves at a painfully slow pace.

The only way the director made of use of the superstar's mass image was to utter some dialogues,that is,to carry forward his agenda.I don't want to discuss whether the agenda is right or wrong.Infact, there is nothing wrong in utilizing a hero of Rajni's stature, to utter such dialogues.I would also appreciate the superstar for accepting such a role.But Ranjith failed to provide any justification for keeping such dialogues.

We all believe in some ideology,its quite natural. It is ok to make a movie to justify what we believe in.It is also fine to have one or two dialogues to cater our audience. When you make a movie,which isn't exactly based on your ideology and yet you try to thrust your views on audience through scenes and dialogues,which are not well connected to the script,you would end up making some halfbaked stuff. That is what happened with Kabali :-).
Posted by Harish.M at 9:56 AM