Dr.A P J Abdul Kalam - the man who taught how to dream 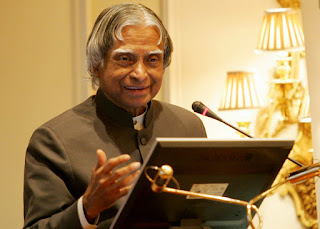 July 27,2015 is a sad day for India as it has lost an eminent scientist,great president and a humble human being Dr.A P J Abdul Kalam.He played a key role when India carried out nuclear tests in Pokhran during the Vajpayee regime.

In India, the President post is more like a rubber stamp,but Dr.Kalam used some exclusive powers, given to President,which not many of his predecessors used.Dr.Kalam will be remembered for two of his important actions as a President. One - it is said that, it was Dr.Kalam who stopped Mrs.Sonia Gandhi from becoming the Prime Minister of India citing the citizenship issue.Two - he exercised his power under Article 111 of Constitution and sent back the "Prevention of Disqualification Amendment Bill,2006" for revision.

As a President,govt offers him free Iftar during the month of Ramzan,but Dr.Kalam gracefully ordered the food to be served to poor children. Even after completing his term as President,Dr.Kalam continued his social work.He has given lectures in many colleges and schools.He stayed in Anna University.He paid for the food consumed by his family members in Rashtrapathy Bhavan canteen.

It was Dr.A P J Abdul Kalam, who gave confidence to the demoralized Indian youngsters that one day India will become a superpower.His 'Wings of Fire' was able to ignite many young minds.This book has a special place in the annual book-fair conducted in Chennai every year.His Vision2020 convinced us that India will be the superpower in 2020.India may not become a superpower in 2020, but we will be on track.

Watch this 2 minutes video.The words he uses,his majestic voice and gallant body language will inspire anyone.


The man hails from Rameswaram.He was born in a poor family,but now the entire world weeps for his demise.This is called 'achievement'.His house was shown in TV channels.It is so simple that none will say its a former President's house.Nowadays even panchayat presidents owns properties worth lakhs and crores,but inspite of being a President of the nation for 5 years,this man lived such a simple life.Once I have seen Dr.Kalam, during my college days,at a close distance.When one of my friends went near his car and asked for an autograph,the man patted the guy on his shoulders and politely said 'son,its getting late for me.I have to board the flight at 4.30,if I give my autograph to you,others will be disappointed as I cannot sign for everyone now".Such a humble and sincere man he was.

The man who taught us the value of dreams is no more.I started blogging in the year 2009.I gave my blog title as 'Start Dreaming' inspired by Dr.Kalam's words only.Though his age is 84,it is too difficult to overcome the sadness.

Our request to the central govt is to set up a university,mainly for scientific research and name it after Dr.Kalam.Our deep condolences to the family members of Dr.A P J Abdul Kalam. May his soul rest in peace.
Posted by Harish.M at 12:11 PM

Very well written, Harish :) Dr. Abdul Kalam was my favourite too. The best way of paying our respects to him is to be inspired always and do something good for the Nation, however big or small. Thanks for writing this blog :)

Aparna - Thanks a lot for commenting :-) As you said we all should work together to make this world a better place to live.. That will be a real tribute to Dr.Kalam