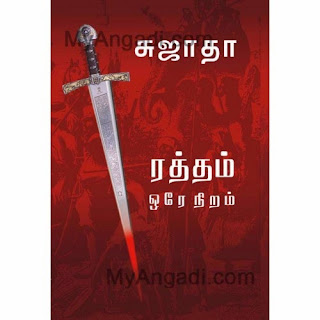 Sujatha's Ratham Ore Niram - a novel based on First Indian war of Independence (1857). One of the best historical novels.It doesn't blindly demonize the British.McKinsey - a cruel British captain,has no respect for women or no sentiments at all.Muthukumaran,a local guy defeats Mc Kinsey in a fight(Silambam - martial arts) and an angry Mc Kinsey kills Muthukumaran's father in confusion.Now Muthukumaran wants to take revenge against Mc Kinsey.He is on a mission.
Captain Ashley, total contrast to Mc Kinsey.He follows ethics,doesn't accept killing women and innocent people.He writes poems to express his love to Emily while Mc Kinsey directly touches her 'romantically' to get her and Emily marries Mc Kinsey while she still sympathizes Ashley.Later she realizes how cruel Mc Kinsey is and finds out some kids in a locality resembling Mc Kinsey.If am not wrong, Sujatha's Karuppu Sivappu Veluppu was stopped because of this episode.

Though this is a historical novel and based on first war of Independence,it doesn't fail to entertain us.Characters like Pooncholai and Bairagi are added mainly for entertainment.Through Ashley's character,Sujatha means,not all the Britishers were cruel and there good people like Ashley too. One need not doubt this,yes there were good people in British side too and a best example would be Lord Ripon.So Ashley's character is very much believable.The novel moves at a brisk pace and scenes like Ashley helping Muthukumaran to escape twice, Muthukumaran rescuing Sivagami(Pooncholai's younger sister) from British custody etc are typical Sujatha touch :-) . The following conversation between Ashley and Edward Mc Kinsey shows how the 1857 revolt started.When you read this novel completely,you will understand 'what caused the revolt and how it ended up'.

What makes this novel unique is the 'balance' which Sujatha maintains in describing the atrocities of British and also the Indian rebels.While Sujatha describes the cruel nature of British through scenes like Mc Kinsey enjoying an Indian widow getting burnt alive,British army ruthlessly killing 2 children because they were wearing a rebel like dress etc etc. The narration of Bibighar massacre was so hard-hitting that even being an Indian,I sympathized for the British.120 British women and children captured by the Sepoy forces were slaughtered mercilessly and their remains were thrown into a nearby well to hide the evidence.After reading this book,some questions came to my mind - 'should we take it as all is fair in war? should we oppose wars/fights at any cost?'. On a killing spree one may kill any number of people,but that will haunt him throughout his life.
Infact, there is an important character called 'Bairaagi' (kind of monk, though not exactly..this monk is an expert in martial arts and also cracks adult jokes at times) and this Bairaagi justifies all these war cruelties and he says 'even rape is right in war'.On the other hand,he also describes about British people trapped in Kanpur.They were on losing side and they were even sure of their death in the war.Amiliya,an innocent girl once says to Emily, 'before our troupes reach Kanpur,we all will be raped' and she laughs at an old lady.And she goes on,'after we come out,first thing I would do is to buy a dress as yours'..While offered to leave by the Indians, these trapped people still carried some valuables with them and Amiliya says 'whatever happens,desires of people remains the same'..the death of the 120 people including Amiliya will move anyone to tears.
There are emotional scenes like Muthukumaran saving Emily from an Indian soldier,who tried to rape her.While Muthukumaran takes Emily with him, she emotionally thanks God for sending Muthu to save her.Finally Ashley comes searching Emily and finds her.What happens then is the climax.

I read this book only last year.Once in a while,'Ratham Ore Niram' comes to my mind and also the horror suffered by innocent people(both Indians and British). Sujatha Sujatha thaan
smile emoticon not sure,if he was honored with any award in the field of literature,but his books will be loved by future generations too compared to some 'award winning books/novels'.  I have said this so many times 'Writer Sujatha is immortal smile emoticon '.
Posted by Harish.M at 11:54 AM

Sujatha took a long time research before writing this story. He visited several libraries for references. The novel was published in Kumudham on weekly series. Within few weeks kumudham was forced to stop due to agitation in some southern parts of TN. The reason was that he has mentioned a community who were then called 'sanaan'.It hurted the nadar community. They burnt lacs of Kumudham books in agitation. That was the reason to stop Sivappu,karuppu,veluppu. His long researches went in vain. Later it was published in modified version titled Raktham ore niram. It was not his opinon. He wrote what mentioned in the history.

@Nagarajan - yes.. thanks for commenting