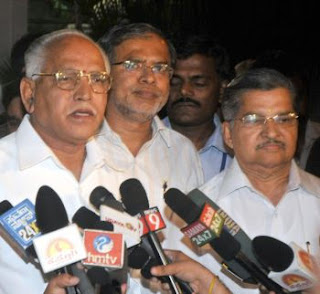 I believe almost all are aware of what is happening in Karnataka.If not,a small recap:

Last week,Karnataka CM Mr.B S Yeddyurappa,sacked few ministers from his cabinet for rebelling against him and withdrawing support to his 29-month-old government. After this,11 BJP MLAs(including these 2),announced displeasure over Yeddyurappa's leadership and announced that they will not support the Yeddy's govt anymore.. 5 More independent MLAs turned against him... As a result of which a confidence vote was conducted on 12th October,2010.The previous day,Karnataka governor,H R Bharadwaj,had advised the Karnataka assembly speaker,K G Bopaiah not to disqualify any MLAs.But on 12th morning,the speaker disqualified these 16 MLAs.As a result of this,the 224 member legislature was reduced to 208.After this a voice voting was conducted in the assembly by the speaker and the BJP which had the support of 106 MLAs,had won the trust vote.
Since the assembly strength was reduced to 208,the half-way mark became 104 and since the BJP had 106 MLAs support,it was declared the winner.
But the drama doesn't end here.Now H D Kumarasamy,son of Deve Gowda and JD(S) party leader, has expressed dissatisfaction over the way the trust vote was conducted and he says this is unfair.The grand old party of India,Congress,too calls it a blot on democracy.The congress loyalist,governor Bharadwaj has done his duty,by recommending president's rule in Karnataka.Now he will be in good books of Rahul Gandhi :-).
Let us see,what kind of gentleman is this H R Bharadwaj.He was the law minister in the previous UPA govt.At that time,Chief Election Commissioner of India,Mr.Gopalasamy recommended the dismissal of the election commissioner,Mr.Naveen Chawla(the current Chief Election Commissioner of India).,since there were several complaints against Mr.Chawla and that Chawla didn't give a convincing reply to the notice sent by Gopalasamy.But the then law minister Mr.H.R.Baradwaj,clearly told his recommendation will not be considered at all and the Chief Election Commissioner has no right to do such recommendations.
Let us see what article 324(5) says:

Election Commissioner or Regional Commissioner shall not be removed from office except on the recommendation of CEC. 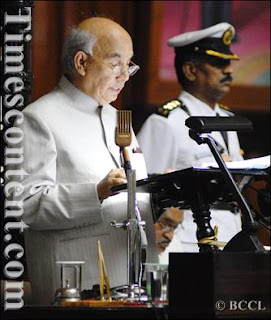 He was a law minister who always supported unlawful activities.He favoured the withdrawal of cases against Ottavio Quattrocchi, main accused in Bofors scandal.The point to be noted is that he is an Italian businessman.And this Bharadwaj,being a governor of Karnataka also expressed displeasure over the corruption charges against the Reddy brothers in the Karnataka govt and also gave a kind of warning to the Karnataka govt.Well if a governor can condemn corruption accusitions against ministers,then why can't the president do the same against the central ministers?There are allegations of corruptions against the IT minister A Rasa.It is said that he has involved in a scandal of more than 1 Lakh Crores(the estimated amount is around 1.93 Lakh crores).Why the honorable president Mrs.Pratibha Patil is silent on these issues?


Everyone knows the history of congress.They have great history of enforcing emergency when Mrs.Indira Gandhi's election victory was about to be disqualified.After dissolving the NTR govt., in Andhra, Mrs.Indira Gandhi said in parliament that she don't know anything about the dissolving of Andhra govt.Even in recent times,last time in Jharkand,in the year 2005,when the BJP had the support of 41 MLAs and it was also proved in Assembly, the then Jharkhand governor, invited Shibu Soren to form government.When BJP argued that they had the support of 41 MLAs,the Soren's JMM and congress claimed that they have the support of 42 MLAs. But the total strength of Jharkhand assembly itself is 81.How funny!!Isn't it?But after the supreme court intervened,Soren was forced to quit and Mr.Arjun Munda became CM,thats a different story. 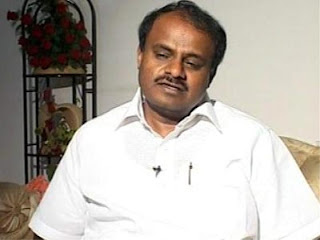 Another gentleman in this issue is Kumarasamy.He was the former CM of Karnataka.Actually the Janata Dal(Secular :D) and the BJP together formed the government last time.There was an agreement that for the first 2 and half years the CM will be from JD(S) and the next 2 and half yrs CM will be from BJP.But after 2 and half years Kumarasamy refused to resign and he tried to form government with the help of congress.But all his efforts went in-vain.Later BJP won the assembly elections with a good majority.

But coming to the other side,just because these people have bad track records I can't conclude whatever happened in Karnataka assembly as right.There is no clear-cut legal reason for disqualifying the MLAs.The BJP should have faced the trust vote boldly.No matter even if they lose,they should not have given room for this much controversy.Anyway the governor has given one more chance to Yeddyurappa to prove majority on 14th oct.2010.And there is a case against the way the trust was conducted,in high court.If the govt couldn't give valid reasons,the trust vote will be considered invalid and the BJP govt might be dissolved.So let us wait for the court verdict.

For a national party like BJP,such incidents will not give a neat image.It can't gain any respect from public.Anyway if the court concludes disqualifying MLAs illegal,then the act of the speaker Bopaiah has to be vehemently condemned.

Let us wait and see what the court says in this issue.
Posted by Harish.M at 12:25 PM

I appreciate your views on this issue.But a lil disappointment is that,in some point of time you tried to support BJP.At the end of your blog,your report about BJPs stands in this issue,seems half-hearted.either you should condemn BJP for such a bad image or you should support them thoroughly.I dont know why your trying to insert other issues into this matter.Is it to show your favourism towards BJP or showing your dislike for this congress govt? Justify

@Gokul - I also appreciate your interest in criticising this article and me :D.. What r u trying to prove through you comment?Are u trying to paint me saffron :P?I don't want to act like a neutral here,I don't like congress,for its anti-national stand.

But I have related other issues here not to show my hatred towards congress,but to show that its a routine for congress to play with democratically elected govts in which someother party is in power..

If u r going to say that either Kumarasamy or Siddharamayya(congress leader in Karnataka) has no connection in turning the MLAs against the ruling BJP,then am sorry u r very naive.. I have quoted all other incidents purely to highlight the fact that the congress will stoop down to any level to capture power..

When it comes for the criticism of BJP in this issue,till now there is nothing wrong with the approach of BJP.. Only thing is if the court confirms the way the trust vote was conducted as unlawful or illegal, then it has to be condemned.. Thats my view :-)

And thanks for ur valuable comments :-)

Worst politics ever seen in Karnataka.

Rohit - For the past few years its witnessing such politics only.. It all started with Kumarasamy's refusal to make a BJP candidate as CM as per their deal.. The JD(S) always plays dirty politics and as usual congress joins the dirty side

Now what is happening is complete non-sense..

Thanks for commenting here :-)