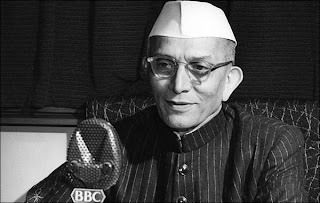 Independent India has seen so many Prime Ministers in the past 65 years.People remember Jawaharlal Nehru and Indira Gandhi.Even today Rajiv Gandhi and his assassination is a poll issue in India.And no need to mention about the current PM,he is very popular among the masses for his obedient behavior and calmness.Surprisingly some people still remembers Atal Bihari Vajpayee too.But most of them are not aware of India's greatest Prime Minister - Mr.Morarji Desai. Let me share some information about him.

All of a sudden why am I coming up with a blog post about Morarji Desai?Yes there is a reason for it.His birth anniversary falls on 29th February.He was born in a leap year(29-Feb-1896).Well Morarji was in Congress in the beginning.He fought against the British rule by joining Civil Disobedience Movement.He spent many years in jail during freedom Struggle.He was a true Gandhian.

Due to his rising popularity in the Congress party,he was considered to be a strong candidate for the post of PM after the death of Jawaharlal Nehru.But Lal Bahadur Shasthri became PM and again after Mr.Shasthri's death,Indira Gandhi became PM.But the year 1975 brought about a new change in Indian politics.It was in the year 1975,Morarji Desai's Congress(O) won the Gujarat assembly  elections by defeating the Congress party. If the results of the Gujarat's assembly elections were a shocker to Mrs.Indira Gandhi and co,the verdict given by Allahabad high court in a case against Mrs.Gandhi dealt a big blow to Mrs.Gandhi.The court declared Prime Minister Indira Gandhi guilty of electoral malpractices.She was found culpable on three counts:dishonest election practices,excessive election expenditure,and misusing the govt machinery and officials for party purposes.The judge disqualified her election to the Lok Sabha from Rae Bareli.He also barred her from contesting any elections for 6 years.

This judgement made Mrs.Gandhi highly insecure.She wanted to suppress the growing popularity of the opposition parties(Congress(O),Bharatiya Jana Sangh etc). To do this,she declared Emergency in India. The reason given by her clearly proved her motive. She said to save the nation from a massive conspiracy by the opposition, the emergency has been declared.Mr.Jai Prakash Nayaran(known as JP) was the one who was uniting the opposition. JP was a true Gandhian and had/has a clean image.Then from where the 'opposition conspiracy' arose?Since JP demanded Indira's resignation after the Allahabad court judgement,he was arrested after declaring emergency. Not only JP,so many other prominent leaders like Morarji Desai,Atal Bihari Vajpayee, L K Advani etc were also arrested. Freedom of press too was suppressed.Important point to be noted here is,the emergency was declared without consulting the cabinet. The President or Governor is not supposed to introduce any rule without the consent of the cabinet.It was a 2 year draconian rule in India.

But then finally the Emergency was lifted.External pressure from world countries and other factors like Indira's desire to get re-elected to Lok Sabha etc.,forced her to lift the emergency.Mrs.Gandhi thought, conducting elections at that point of time would make the opposition's chances difficult,as their(opposition's) activities were suppressed during the 2 year emergency.But the political scenario in India was different. JP declared the formation of Janata Party and announced Morarji Desai as its chairman. Other parties like Congress(O),Jana Sangh,Socialist Party,Lok Dal etc merged into a single party - Janata Party. The momentum was with the Janata Party and the Congress underestimated the people of India as well as the opposition. The Janata Party won the elections with an absolute majority of 295 seats while the Congress was reduced to 154. First time in the history of independent India an non-Congress govt was formed in the year 1977. Though there was a competition between Babu Jagjivan Ram and Morarji Desai, JP chose Morarji for the top job. Charan Singh too backed Morarji Desai.

Morarji Desai became the first non-Congress Prime Minister of India.I would say the Janata govt was the golden period for our country.It was during his rule,the prices of essential commodities came down.Today we have a great economist as Prime Minister who firmly says that price hike is unavoidable.But this man,who came from an ordinary school teacher's family did so much to poor people. It was during the Janata Government in India,one rupee meal scheme for poor people was introduced.

Morarji is a true patriot.Wiki-leaks released a cable describing a meeting between an American ambassador and Mr.Desai..The cable read, "During a one-on-one meeting with then US Ambassador to India Robert Goheen on June 7, 1979, Prime Minister Morarji Desai said that if Islamabad built or tried to test a nuclear weapon, India would act to “smash it.” And Desai dismissed outright a proposal for a pact with Pakistan on the “non-use and non-development” of nuclear weapons".Morarji assured the then Pakistan foreign secretary that,"India had only good intentions towards Pakistan and wished to do nothing to cause it difficulties, but also said that ‘If Pakistan tries any tricks, we will smash you'". But nowadays we have a PM who cries to Obama about the terrorist activities of Pakistan.

There is a misconception among public that, to be successful in politics,one has to be corrupt.Such people can learn from this great man.Today we have a Prime Minister with a 'clean image'. I have come across so many people with the view that the Prime Minister is an honest person but only the 'forces' controlling him and his alliance are corrupt.Turning a blind eye towards mistakes is the biggest mistake. An individual (Subramanian Swamy) filed an application with the Prime Minister to prosecute A Raja in the 2G license issue.If he is really 'clean',he should have granted the permission to prosecute Raja.But the 'coalition dharma' made him to keep quiet.See what Morarji bhai did in contrast.

Karunanidhi and DMK were declared to have mastered Scientific Corruption' by Sarkaria Commission. DMK was part of the 1977 Janata Party Government.After emergency, Karunanidhi wanted to free himself from these corruption charges.He approached JP through his MPs fo this.JP referred the matter to Morarji. Morarji Desai gave a clear cut reply as "Mr.Karunanidhi, law will take its own course". Such was honesty.

But later on he quit the PMO when he lost majority in the Parliament.Charan Singh became Prime Minister with Indira Gandhi's help.In his short tenure Morarji gave a good government.In fact,the best government I would say.But the sad part is,not many knew that India had a Prime Minister called Morarji Desai.We have lot of Nehru Stadiums.There are Rajiv Gandhi and Indira Gandhi Airports.Dams,libraries etc and etc everything carries one of these Gandhi names.But to find Morarji Desai's name for something like this is a rarity. Morarji Desai spent 2 years in jail during emergency.Had he accepted for a compromise he  could have easily come out on parole. He wrote "I would prefer life long detention(in jail) to becoming the Prime Minister in conditions such as the Emergency". Such was his determination.

After he quit his public life,he spent his rest of the life in Bombay and he died at the age of 99 in the year 1995.

The government and media may forget him.But let us remember this great man.
Posted by Harish.M at 10:50 AM

Thanks for making us remember him...
Almost forgot him after my school..

@Jothi and Gokul - Thanks for your comments :-)

Nice Blog Bro... I didnt know much abt him.. but seems I will read abt him more...

Nice Blog Bro... I didnt know much abt him.. but seems I will read abt him more...

@Apurba - Thanks for your comments :-)

Thanks Harish, for a nice article.

I shared it on my FB, g+ accounts

@Madhavan - Thanks a lot for your suppert :-)

The review about Morarji Desai is indeed thought provoking and should be read by each and every person who is a citizen of this country. His role as India's Prime Minister was distinct in itself especially his views on Indo-Pak Relations. He was a man of principles and a patriot but never agreed on any issue that was principally wrong. There were serious and sincere efforts during his tenure made by India to improve bilateral relations with Pakistan and success had been achieved to an extent. Principally in favour of non-violence Morarji Desai was opposed any political interference in the internal matters of any nation and especially towards his neighbours. In other words he never supported a 'Big Brother' approach towards India's neighbours.

@Manoj - Thanks for commenting dude.. thats a nice comment :-)

MORARJI DESAI IS THE WORST PRIME MINISTER OF INDIA. HE ONLY WORKED TO DESTROY INDIA. THE BLOGGER IS JUST PLAIN IDIOT.

Mr.Anonymous - you are welcome :D

I had the privelge of meeting him personally, thrice at his residence in Mumbai. Truely, a man with principles. Can today's generation think such a virtue possible in politics ? Yes. because he had no self interest and ONLY a mission to serve the country.

@Yogesh - thanks for your comments :-)

Is it 2 yrs or 20yrs? I don't know the history. So, it's not an offending question but question to know the truth. Thanks

@Sundar - that was a good catch.. actually it was a typo and I have corrected it now..thanks for commenting :-)

How could be a man called as best or greatest when his idiotic act has costed India in terms of loss of life of brave agents and failed mission to wipe Pak nuclear programs which is costing us now in form of nuclear blackmail.